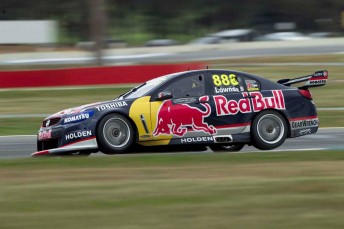 Craig Lowndes has dropped from second to fourth in the V8 Supercars Championship standings after being handed a 25 point penalty for careless driving.

One of several charging on a new set of tyres in the closing stages, Lowndes made contact with Michael Caruso’s Nissan on the exit of Turn 10 while fighting for 10th on the final lap.

While Lowndes eventually finished in that position, Caruso’s Nissan ended the race in the left-hand fence.

The penalty drops Lowndes behind Ford Performance Racing duo Will Davison and Mark Winterbottom in the standings, increasing the gap to leader Whincup out to 72 points in the process.

Lowndes’ finish in Race 27 was Red Bull Racing Australia’s only top 10 result in a shocking weekend.

The stewards also investigated early Turn 2 contact between David Wall and Maro Engel and the Safety Car-inducing Turn 5 clash in Race 27 between Mark Winterbottom and Rick Kelly, but concluded that no breach of rules had been made on either occasion.