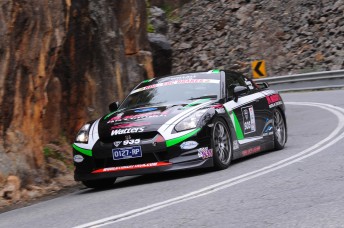 Steve Glenney has completed an outstanding drive with victory in the four-day Targa Adelaide rally, the first round of the CAMS Australian Targa Championship.

Aboard a 2009 Nissan GT-R, Glenney and co-driver, Bernie Webb, took the lead on the fourth stage of the event on Thursday and were never headed, finishing one minute and 39 seconds ahead of reigning Targa champion Jason White (Lamborghini Gallardo) and Tony Quinn (Nissan GT-R) after 28 stages.

Glenney was the class act, pushing hard in wet on days one and two, and never relinquishing his advantage. When Jason White’s Lamborghini suffered a broken front differential mid-way through day two, Glenney’s win was all but secured.

“It’s a great result for us against a very strong field here in Adelaide, and I think the top five or six traded stage wins throughout the week, so to come out on top we’re thrilled,” Glenney said.

“I think the heavier Nissan GT-R, with its road-style tyres, does help in the wet, so we were able to get the jump on everyone early on.

“That helped, but then we did some tuning to our dry set-up today, which still needs a bit more work, but I think we’re able to keep pace in these conditions too.

“My local knowledge helped and made me feel more comfortable with the surroundings, but I’ve raced on the Tasmanian roads more than I’ve raced here.

“We’re now looking forward to the next few rounds of the championship and taking the fight right up to Jason (White) again.”

The next round of the CAMS Australian Targa Championship is Victoria’s Targa High Country, based out of Mt Buller, from November 8 to 10.