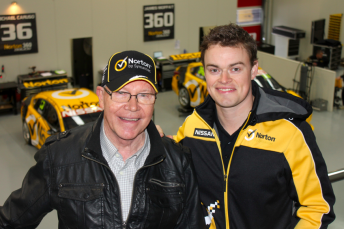 Only visiting Nissan Motorsport’s Melbourne factory for the first time in recent weeks, Allan has always been wary of what such a famous surname can mean for a racing son.

Often typecast as somewhat of a silver spoon, the pressure that comes with the son-of-a-gun tag ensures that his support for James’ pursuits has been kept in the background whenever possible.

“There’s a reason why I keep away from the races as much as I can,” the legend told Speedcafe.com via phone just hours after the chequered flag fell on Race 25.

“I don’t need to rain on his parade.”

Largely forging his own path, there’s no question that the now 29-year-old James Moffat did the hard yards on his way to V8 Supercars.

Beginning his national circuit racing journey in 2004 through the long since defunct Lotus Trophy, an association with Dick Johnson Racing led to a similarly unorthodox stint in the V8 Utes Series for the following season.

With DJR soon plunged into a deep financial crisis, Moffat spent 2006 on the sidelines before reinventing himself with an Australian Formula Ford Championship campaign the following year.

Having proven his speed against the likes of Tim Blanchard and Ash Walsh in the open-wheel cars, a solid 2008 season in the Carrera Cup subsequently opened the door to a two-year stint in the V8 Supercars Development Series, and an eventual graduation to the main show.

Providing flashes of both speed and recklessness in two mid-pack years back in the DJR fold, Moffat has since shone through a difficult early development period for Nissan, and now finds himself as a V8 Supercars race winner with a freshly signed multi-year contract in his pocket.

“I think he’s on his way now,” says Allan in typically understated fashion.

“It’s up to him to concentrate, keep himself pointed and work hard with the team. He’s been doing a good job of that so far.

“(Further success) is just a question of how hard Nissan wants to work at ensuring that everything that can be supplied to the race team is supplied.”

Moffat was quick to praise not only the efforts of his son on Saturday, but also that of team-mate Michael Caruso.

Having lost the lead at the half-time restart, Caruso was in a position to return serve on his team-mate with five laps to go after a mistake from Moffat, but elected against launching an attack.

“I was very proud of the way that the two fellows worked as a team; it was very commendable,” said Allan, whose career was perhaps best defined by the one-two form finish that his Moffat Ford Dealers operation enjoyed in the 1977 Bathurst 1000.

“If you’re ever going to get a one-two you don’t need to be fighting each other. That’s something I learnt a long time ago.”

Equipment permitting, can a maiden win open the floodgates to further success for James?

“Winning for the first time certainly shows you what you have to do,” he offered.

“James did an excellent job getting off the line in the second race and held it. That’s what it takes and you have to get that in the back of your mind.

“You’re not there for a cruise around and just hoping for the best. You’ve got to make the best happen for yourself.”

When asked if he’ll be trackside to watch his son race at any time during the remainder of the season, Allan’s response is simple.

“I’ll see how my nerves are going. Watching at home also means that I’m not shaking as much as I would be if I was standing at the race track…”