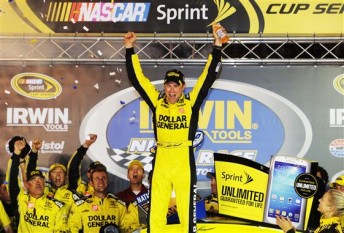 The result is Kenseth’s fifth win of the season and 29th win in his Cup career, third at Bristol, but his first since 2006. It was also the third time this season that Kahne has finished second to Kenseth.

There were multiple wrecks on the ‘World Fastest Half Mile’, including championship leader Jimmie Johnson and the biggest involving Denny Hamlin, Ryan Newman and Kevin Harvick which brought out the red flag.

Harvick parked in Hamlin’s pit stall after the incident and after Hamlin bumped Harvick’s car out of the way, Harvick came out to talk. Harvick seemed satisfied with Hamlin’s explanation because the drivers shook hands briefly before breaking away.

Carl Edwards suffered an engine failure, while Kurt Busch started on the front row and led the early segment of the race before a wheel issue brought him to the garage and he finished back in 31st.

Australia’s Marcos Ambrose avoided all the crashes to bring his Ford home in eighth place to give him his second-straight top-10 finish in the Cup Series.

“That’s two top-10s in two weeks and we’ve got to take that,” said Ambrose.

“We didn’t start off great and we didn’t finish great handling-wise, but we fought hard all night and got some track position at the end that really helped us a lot.

“This is a really aggressive track and you’ve got to be aggressive all night. You’ve got to gnaw on that steering wheel and I just like getting up on the wheel like that.

“These are good nights to really test your mettle and see what kind of man or lady you are out there and get after it.”