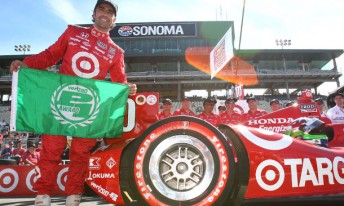 Dario Franchitti has edged Ganassi team-mate Scott Dixon and Will Power for the pole position at the IndyCar race at Sonoma in California.

The four-time series champion took his fourth pole of the season, third pole start at the Sonoma Raceway and Chip Ganassi Racing cars have won the past four races.

“We’re very focused on bringing a good result for the team,” said Franchitti.

“I’ll do anything I can to help Scott win the championship, but I also want to win the race,” Franchitti said.

James Davison will start the race from 21st, one place ahead of the returning Ryan Briscoe.