Courtney: The HRT will only get stronger

Courtney: The HRT will only get stronger 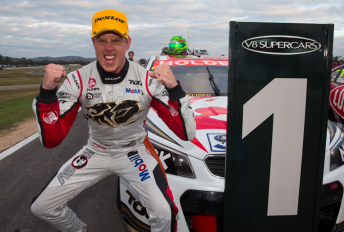 Fresh from breaking his 82 race victory drought, James Courtney has warned that the Holden Racing Team will only get stronger as the season continues.

Courtney won convincingly from pole in Race 27, leading every lap on his way to becoming the 12th different victor of the season.

The result followed fifth and third place finishes across the opening two races of the weekend, ensuring that Courtney has now scored nine top six results from the last 11 races.

By contrast, the 2010 champion had finished in the top six just four times in the first 16 encounters.

Following a difficult 2012 in which the Walkinshaw family were repeatedly rumoured to be looking to sell the team, heavy investment has been made to improve the squad’s performances.

The ramping up of an offsite engine program, a major early-season overhaul of the car’s front-end and a switch to the Triple Eight-imported Sachs dampes are all among the known developments.

“We’ve been working so hard and the crazy thing is that we can see so much that’s coming,” said Courtney after Race 27.

“The whole time we’ve been saying it’s coming, it’s coming, you guys (the media) are probably thinking that we’re making it up and that nothing is coming at all, but there are things in the pipeline and we can’t just transform things overnight.

“Everything has a procedure that has to be gone through and that’s where Steve (Hallam, managing director) has done a fantastic job with our team with a lot more structure. We’re starting to really see the benefits with that now.

“We’re going to have more new stuff on the car for Sandown,” he continued.

“It’s engine stuff and it’s ‘free’ time. The cars are only getting stronger from where we are and we’re putting a lot of money into development and pushing incredibly hard to chase the rest of these guys.”

Courtney was further encouraged by the Winton struggles of the previously dominant Red Bull outfit.

“I think it shows how hard it is in the mid-pack,” he said.

“If you don’t qualify at the front you finish where you start.

“They’ve done an amazing job over the last few years and my hat goes off to them, but they’ve got two arms and two legs like the rest of us so there’s no reason why we can’t keep topping them.”

Courtney moved from ninth to sixth in the championship standings across the Winton weekend and is now a relatively scant 160 points adrift of series leader Jamie Whincup.

Set to partner Greg Murphy in the endurance races, Courtney is in no doubt that he’s in contention for a second title.

“If you have a bad Bathurst there are 300 points you can lose. It’s still very much open.”