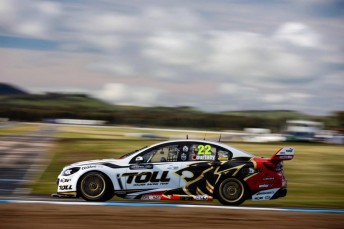 James Courtney became the 12th different winner of a tumultuous 2013 V8 Supercars Championship in a thrilling end to the Winton 360.

The win marks the first for Courtney since February, 2011, and comes just weeks after signing a new three-year contract with the Holden Racing Team.

Courtney led the entire 34 lap journey, which had proven processional until the Safety Car was called with 10 laps remaining.

Almost half the field, led by fifth placed Garth Tander and seventh placed Fabian Coulthard, took the opportunity to dive to pitlane for new tyres.

Coulthard was the highest placed of the stoppers at the restart, charging from 13th to be just 2.8s adrift of Courtney in second by the chequered flag.

The Kiwi may well have won the race if not for another late Safety Car, called just one lap after the restart, to retrieve Jason Bright’s stranded car from Turn 11.

Bright, having earlier fallen from second on the grid to fifth with a poor start, had been attempting to take third from Will Davison when he went off.

Chaz Mostert, who had run second for much of the race, gallantly hung onto third in a rough-and-tumble final lap fight with Tander.

Shane van Gisbergen was another to take new tyres and finished ahead of Davison in fifth.

Running third in the closing stages, Davison briefly led the race by spearing off at Turn 5 and rejoining at Turn 9.

Quickly dropping back into his previous position, the FPR Ford driver fell back to sixth by the flag ahead of fellow non-stoppers David Reynolds, James Moffat and Tim Blanchard.

Moffat’s result aside, it was a disastrous outing for Nissan, with its other three cars failing to finish due to crash damage.

Todd Kelly was spun into the right-side fence on the run to Turn 1 after a tag with Jamie Whincup, causing an opening lap Safety Car.

Brother Rick was the cause of the second Safety Car after contact with Mark Winterbottom heading into the Turn 5 sweeper broke the Altima’s rear suspension.

A final lap crash for Michael Caruso completed the woes.

Another in trouble was Scott Pye, whose Lucas Dumbrell Motorsport Holden caught fire after its exhaust had become bent in the opening lap scrum.

Whincup’s championship lead over second placed Craig Lowndes now sits at 47 points heading into the first of the endurance races at Sandown in September.

See below for the Race 27 result