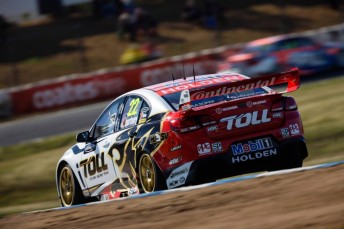 Jason Bright and James Courtney will start from pole position in Races 26 and 27 respectively after topping the back-to-back Sunday qualifying sessions at Winton.

The first of the two 15 minute encounters had seen Tony D’Alberto move to the top of the order with just 90 seconds remaining, before he was quickly eclipsed by the Team BOC Holden.

Mark Winterbottom and James Courtney will share the second row for Race 26, with David Reynolds and Shane van Gisbergen completing the top six.

Courtney had been fastest ahead of the final green tyre runs, but improving his time on his penultimate lap could not prevent slipping to fourth.

The Holden Racing Team driver had no such problems in the second session, however, where he set the fastest two times on his final two laps.

Bright continued his strong form with second for Race 27 ahead of Chaz Mostert and Scott McLaughlin, who had both struggled on Saturday.

The Norton Nissans of James Moffat and Michael Caruso, which took a one-two finish on Saturday, struggled, with Moffat just 25th for Race 26.

The two Nissans are running on the regular E85 blend fuel today following the controversial trial of the E70 on Saturday.

Jamie Whincup, who scored pole for Race 25, will start the respective Sunday races just 18th and 17th after reportedly suffering from a tailshaft vibration during the sessions.

It was another difficult morning for Erebus Motorsport, with a 24th for Tim Slade the best result across the two sessions.

See below for the full Race 26 grid

See below for the full Race 27 grid