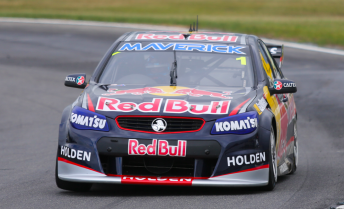 Nissan Motorsport has narrowly missed out on an historic pole position in a dramatic conclusion to Race 25 qualifying at Winton.

Jamie Whincup managed to eclipse Caruso’s best by 0.17s with just 90 seconds on the clock, leaving all eyes on the Norton Nissan.

Caruso went faster again to the second sector before falling off the road at the penultimate corner, stranding himself in the mud on the exit.

With Race Control electing against displaying the red flags, Caruso will still start second behind Whincup, who scored his 11th pole of the season.

“I went for glory at the end there, we were up on a better lap, tipped it in at 11 and parked it in the mud,” recounted Caruso later.

“(But) it’s good that the speed is there, there’s no doubt about it.”

Moffat, who joins Caruso and Erebus driver Maro Engel in trialling a revised fuel blend this weekend, was unable to improve late and remained third.

By contrast to Nissan’s heroics, the 20 minutes proved a struggle for the Erebus Mercedes entries.

Tim Slade will start last after an early mistake saw him bogged in the muddy infield, resulting in a lengthy red flag.

See below for the full Race 25 qualifying result