Casey Stoner laments ‘another weekend over’

Casey Stoner laments ‘another weekend over’ 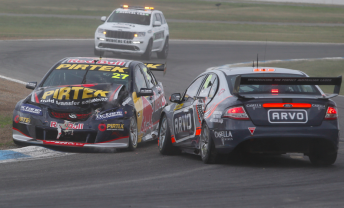 Casey Stoner has been left to wonder when his luck will turn after his run of Dunlop Series disasters continued in the opening race at Winton.

Having qualified 20th, the 27-year-old was an innocent victim in a multi-car pile-up on the opening turn of the 12 lap race.

The Red Bull Pirtek Holden suffered heavy front-end damage in the collision, which had seen Stoner pile into the back of Andre Heimgartner’s Finance Ezi Ford, which had in turn made contact with a spun Taz Douglas.

The incident continued Stoner’s string of shocking results in the opening races of each Dunlop Series round he has contested, and ensures he’ll start both Races 2 and 3 from deep in the field.

“We were optimistic about this race,” he said afterward. 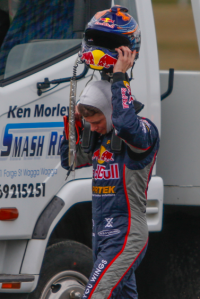 Stoner walks away from the scene

“Normally we start further up the front, get mixed up in something and end up on the back of the grid and then start coming forward.

“So today starting at the back of the grid we were optimistic that we could actually come through the pack and if a few things went our way that we could crack the top-10.

“Unfortunately, it’s another weekend over. We just can’t seem to have any luck.”

It was a tough day all round for Red Bull, with its main series drivers Craig Lowndes and Jamie Whincup chalking up a 21st and a failure to finish respectively in Race 25 later in the afternoon.

Whincup had been leading the field halfway through the first 20 lap stanza when he pulled off suddenly on the front straight with a driveline failure.

“There was a big explosion in the car inside coming out of the last corner and it just had no drive,” he said.

“We got the car back in as quick as we could but the bad news is you have to finish 75 per cent of the race and we missed it by one lap. So there was no point in us getting back out – which is extremely disappointing.

“Other than that, we had good pace, the car had good balance and I guess the silver lining is we’ll be back on the grid tomorrow and have some fresh tyres for qualifying and the two races.”

While earlier in the day Whincup had taken an 11th pole of the season, team-mate Lowndes struggled for speed, qualifying 18th.

Having moved his way to 13th by the end of the first leg, Lowndes was shuffled back to 20th on the restart and could make no progress from there.

“I got hung out to dry on the restart but the biggest issue was grip,” he said, having been overtaken by Tim Blancard in the closing stages.

“It was like an ice-skating rink and I just didn’t have confidence in the rear or front end to attack.”

Whincup and Lowndes are now separated by 101 points at the top of the championship standings.