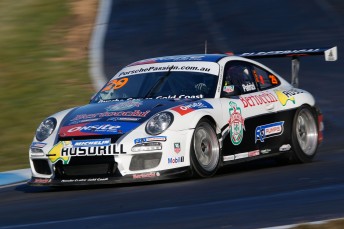 The race was turned on its head on the opening corner when defending champion Craig Baird made contact with front row starters Nick Percat and Steve Richards. Richards was sent spinning while Percat went across the grass and Shae Davies also had his race compromised as he avoided the carnage.

Baird was later given a drive-through penalty for the incident and this allowed Michael Patrizi to assume the lead and he never looked back.

Warren Luff had his hopes of a second place finish end in a spin and he then subsequently got bogged trying to turn his car around.

Steering clear of the dramas was GT3 cup driver Richard Muscat who took second place ahead of former Aussie Car racer Adam Gowens, who was also first driver home in the Elite division.

“It has taken a little longer to get my first win of the season; I had hoped that it would have come at the Rennsport event in Sydney, but we had mechanical issues late in that event,” said Patrizi.

“I was lucky with what happened at Turn 1. From there I managed the race as I knew Baird would get a drive-through penalty.

“This win gives me a bit of confidence for tomorrow. I’ll just take it race by race and see what happens for the round.”

Post race Baird, Richards and Percat had a stern conversation about the opening lap incident with the championship points leader admitting fault.

“I had a really good start and was able to get alongside Percat,” said Baird.

“Once I was there I didn’t see Richards, but by then it was too late. I apologised to both guys; now I’ll concentrate on getting some strong results tomorrow.”

Anton de Pasquale proved too strong for all comers in the open-wheel class, leading every lap from pole position to take the flag ahead of Macauley Jones and Liam Sager.

The two ARC encounters were shared by Brendon Pringel and Mark Griffith, with the latter’s win coming in one of the class’s recently introduced Euro GT models.