Ogier crashes in Germany as Latvala steps up

Ogier crashes in Germany as Latvala steps up 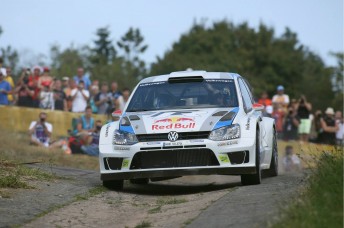 World Rally Championship leader Sebastien Ogier is out of contention at the ADAC Rallye Deutschland after crashing in the morning stages and handing the lead to Volkswagen team-mate Jari-Matti Latvala.

Latvala took the lead after went off, breaking the front suspension on his Polo R and retiring shortly after. This means he could take the title at next month’s Coates Hire Rally Australia on the Coffs Coast.

Volkswagen’s Jari-Matti Latvala has a slender 7.3sec lead over a determined Thierry Neuville in a Ford Fiesta RS.

Latvala was under pressure in the morning loop, losing time on all three stages to Neuville. Then after car set-up changes in service, the Finn upped his pace on the drier afternoon stages.

“I have to be honest, I really enjoyed driving the last two (stages),” said Latvala.

“The car is really nice at the moment and I love it. Okay, it’s not easy, but I think we’re going in the right direction. For tomorrow I don’t know. We’re expecting rain and on this rally you never know what that might bring.”

On tarmac Neuville has never looked closer to his first WRC victory, but the 25-year-old Belgian is giving it everything.

“On the last two stages I was at the maximum, flat-out everywhere – I can’t do more,” said Neuville.

“I was pushing like hell. No mistakes, always very fast and sideways but that’s what you need to do here. It’s big, big fun but when I see the split times I’m a little bit frustrated.” Hayden Paddon is chasing a podium in the WRC2 category

Citroen’s Dani Sordo is best of the rest in third, 19sec behind Neuville with fellow DS3 driver Mikko Hirvonen in fourth.

“We took the hard compound tyre which worked well on the dry sections, but all of the stages we encountered sections where the road surface was damp, and in these sections we had to drive with our head and take it easy.

“We did however win all three stages, and to our surprise set one sixth-fastest and two seventh fastest stage times overall amongst the WRC cars.”