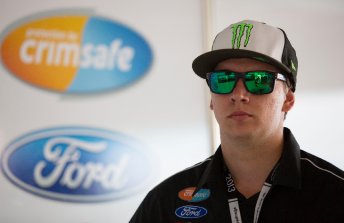 Chaz Mostert is determined not to let ongoing discussions over his V8 Supercars future throw his rapid rise off course during this weekend’s Winton 360.

Currently nearing the end of a two-year agreement with Ford Performance Racing, Mostert graduated from the Dunlop Series to the main championship in May under a loan deal with FPR customer Dick Johnson Racing.

A string of stunning performances from Mostert, including a race win last time out at Queensland Raceway, is said to have drawn interest from several rival teams.

Although Ford Performance Racing has taken up its option on Mostert for 2014, the 21-year-old confirmed on Friday that he is yet to sign-off on the details of a new contract, leaving open the possibility that he could go elsewhere.

“They’ve looked at doing another two-year deal but I haven’t sat down and looked at all the nitty gritty yet,” said the 2010 Australian Formula Ford Champion.

“Obviously with Dave (Reynolds) and Will (Davison) not signed away yet we’ve got to work out what we’re doing.”

As Mostert suggests, which car he will be driving if remaining in the FPR fold is the biggest ‘detail’ currently in question.

Will Davison’s new contract remains in limbo due to ongoing negotiations between FPR and Ford that will play a large role in determining the team’s capacity to offer the former Bathurst 1000 winner a competitive salary.

Both parties say they hope to remain together after a successful three-year relationship to date.

Reynolds meanwhile, whose contracts are done directly with the #55 car’s franchise holding entity, Rod Nash Racing, confirmed on Friday that his deal is very close to being locked in.

Owner of the currently Alex Davison driven fourth FPR entry, Charlie Schwerkolt, is yet to confirm his plans for 2014, with speculation continuing that the #18 REC could be parked elsewhere.

Remaining at DJR is therefore thought to be Mostert’s preferred solution, assuming that he is not made an irresistibly attractive offer from an outside operation.

Saying that he “hasn’t thought too much” about the various possibilities that exist, Mostert told Speedcafe.com that he’s leaving the discussions to his recently reshaped management.

“It’s pretty exciting to be a young guy and be wanted by some pretty serious teams out there,” he said.

“I’m just soaking it in and that moment, but it’s a bit much to deal with by myself, so I’ve put some other people in place to look after some of that stuff now.

“We’ll see where we end up in the next month or so.”

The #12 DJR entry has effectively run as a fifth FPR Falcon since Mostert joined the team, with the driver and his FPR-employed engineer Adam de Borre taking part in the factory team’s engineering briefings.

Mostert, who works at FPR’s Melbourne workshop between events, says he’s keeping his expectations in check for this weekend despite his car being a potential winner.

“I think I’m still learning a lot in myself,” he said.

“It’s pretty hard to, at least in the dry, just win and dominate from now on like a Jamie Whincup or someone like that.

“But the car is definitely capable of doing a really solid job, I’ve just got to try the best I can do.”