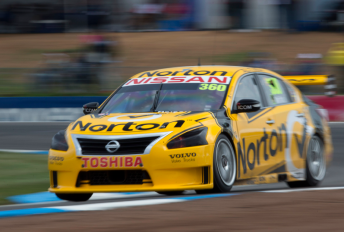 The Norton-backed driver set off on a rapid two lap run in the final minutes, immediately eclipsing the previous best of team-mate Rick Kelly by 0.23s.

Tim Slade managed to split the Nissans moments later in his Mercedes, ensuring a lock-out of the top three from the new-for-2013 manufacturers.

After a typically quiet Friday, championship leader Jamie Whincup spent a large portion of the session in the garage making changes.

A single lap final run was good enough to lift the Red Bull Holden from 19th to a high of second, eventually ending up fourth.

The fastest times in qualifying are expected to come on the first lap of each tyre set with those running good tyres in practice, including Moffat, generally losing their rears on the second lap.

An almost 10 minute red flag delay was required early in the session to retrieve Tim Blanchard’s car from the Turn 4 gravel.

The Dick Johnson Racing Ford was returned to pitlane on a flatbed with rear-end damage and did not make it back out for the remainder of the session.

The session was run in dry and sunny conditions, allowing Moffat to lap over a second quicker than he had to top Friday.