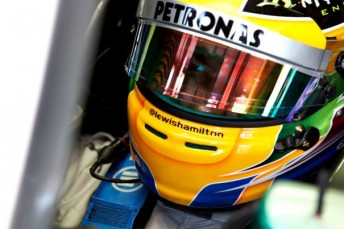 The result marks Hamilton’s fourth pole position of season 2013 and fourth in succession.

It began raining as the lights went green and nine of the 10 cars hit the track. By the time the chequered flag flew, the track had virtually dried once again.

With a minute to go, it looked as though Paul Di Resta may have secured another Spa pole for Force India after his team held him in the pitlane early in the session and sent him out as the first on intermediate tyres.

It was not to be. Nico Rosberg was the first to depose the Scotsman, before the pair of Red Bulls elevated themselves above the German, with Sebastian Vettel outpacing his team-mate Mark Webber again.

The pulsating qualifying session began on a drying track, causing confusion among the teams and left a number of big names high and dry, including Australia’s man of the moment, Daniel Ricciardo.

He  was caught out in the drying conditions in Q1, missing a transfer position in 19th.

“We got too excited and put the inters on too early, in hindsight, we should have waited, it is disappointing, but these conditions aren’t easy,” said the West Aussie, who is widely touted to replace countryman Webber at Infiniti Red Bull Racing.

In a strategically poor session for Scuderia Toro Rosso, Jean-Eric Vergne finished just one position in front of the Australian.

The Williams pair – Pastor Maldonado and Valtteri Bottas – were Q1 casualties, as were Esteban Guitterez and Charles Pic.

The second period of qualifying featured a number of shock visitors, including the pair of Marussias and Giedo van de Garde.

All three could go no further. Van de Garde took a gamble on slick tyres right at the end of the first qualifying session and it worked seeing the Caterham driver finish third fastest. The joy was short-lived, bowing out in the second session 14th fastest.

Hamilton expressed his surprise at setting the pole time:

“My (lap time predictor) was saying I was a few seconds down, then it showed I was further down, but then I came across the line and the boys told me I was fastest!” Hamilton said. “It was a huge surprise to be here, but amazing.”