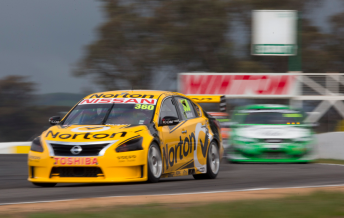 Moffat edged out Reynolds to the fastest time in Friday practice

Anything is possible for Nissan Motorsport this weekend at Winton if it can qualify near the front of the field, believes team owner Todd Kelly.

James Moffat’s effort in the second of two 75 minute sessions on Friday ensured that the Japanese marque ended a day of V8 Supercars action at the top of the time sheets for the first time.

The result has underlined the team’s belief that its cars, which continue to struggle for engine performance, can be competitive at Winton due to the circuit’s tight layout.

Moffat’s position came with the usual rider of differing pre-marked practice tyre quality between cars, while a succession of red flags in the weather-hit day further complicated the picture.

Although qualifying remains a question mark for the team, which has scored just eight top 10 grid positions from 96 attempts so far this year, Kelly is confident of the squad’s potential in the races.

“Qualifying will still be tough because when you’re on a green soft tyre it’s all about how early you can get on the power,” he told Speedcafe.com.

“All the cars will accept full throttle really early in the slow speed corners when the tyre is at its best, which makes the horsepower quite important.

“We’ll have to wait and see. In the races we should be a lot stronger but unfortunately here that doesn’t really count for much because you can’t pass.

“Qualifying will certainly be the key but I’m confident that if we get everything right on our end this will be a round where we can be starting inside the top 10.

“If we can start up there we’ll have no problems staying there,” he added.

Moffat, who signed a fresh multi-year deal with the team in the lead-up to the Winton event, says he was encouraged by his practice speed.

“It’s only practice, but we came into the weekend more confident thanks to a productive test day recently,” he said.

“There were some very changeable conditions, so you had to be on your game. There were plenty of red flags, but I’m happy with how things of gone, so we’ll see if that can continue tomorrow.

“I’m not getting too carried away at the moment. It’s only Friday, but this is very positive for the whole team.”

After a day punctuated by 10 red flags, Moffat joked that it had been lucky he got his mistake out of the way at a recent test day, where he crashed his Altima at Turn 4.