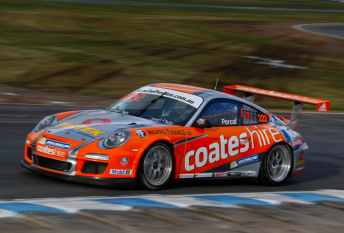 Nick Percat set the pace on a quiet opening day for the Carrera Cup Australia at Winton Motor Raceway.

The Melbourne-based South Australian topped the one and only practice session of the day, run in the dry of the late afternoon.

Percat, a former race winner in Formula Ford and the Dunlop Series at Winton, enters the weekend third in the standings behind Craig Baird and Warren Luff.

Steven Richards was just 0.23s adrift of Percat at the end of the 20 minute hit-out, with Baird, Luff and Shae Davies completing the top five.

Rusty French, competing in his car that was set to be campaigned by GT3 Cup front-runner Michael Almond before a deal fell through, was 18th.