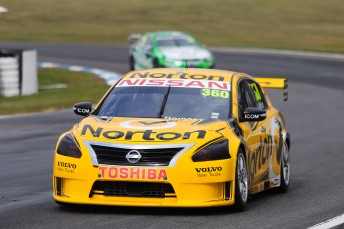 James Moffat has further boosted expectations for a competitive run from Nissan Motorsport at Winton this weekend by setting the fastest time in Friday practice.

After a wet opening 75 minute hit-out, the rural Victorian venue proved dry enough for slicks within just minutes of Practice 2 getting underway.

Spots of rain began to fall towards the end of the session, although did not prove enough to alter lap speed.

Those hoping to bump Moffat from the top with a late charge were left disappointed as a trip into the Turn 4 tyre barrier for James Courtney ensured the session was effectively over four minutes early. As was the case in Practice 1, the wet track verges contributed to a total of five red flags.

Three were called for single car incidents at Turn 4. Scott Pye and Lee Holdsworth had earlier spun at the corner, with the latter’s Mercedes suffering left-rear damage after making the tyre wall.

Off-track excursions for Alexandre Premat at Turn 11 and Dean Fiore at Turn 8 accounted for the remaining stoppages.

Dean Canto, Karl Reindler and Nick Percat were the only three co-drivers to cut laps in the second session, which was open to primary drivers for its duration.