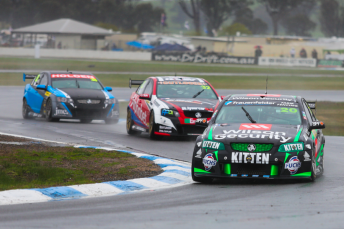 Andrew Jones has made a strong start to his quest for a first race win in this year’s Dunlop Series, topping both practice sessions on Friday at Winton.

A total of 10 red flags punctuated the two practice session, mirroring the total stoppages seen in the V8 Supercars Championship’s practice in half the available time.

A 1:36.45s effort was good enough to lead the way through the wet morning session; while the Practice 2 benchmark proved more than six seconds quicker as the track dried.

Ipswich round winner Jack Perkins and the Sonic Ford of Gary Jacobson were also within 0.3s of Jones at the end of proceedings.

Luke Youlden completed the top five in his one-off return to the series driving a Brad Jones Racing Holden.

Youlden’s car is this weekend being looked after by former Holden Racing Team manager Mike Henry, who has been absent from the V8 Supercars paddock for over a year following his abrut exit from the factory squad.

Series drawcard Casey Stoner managed just 26th and 20th in the respective sessions, ensuring he’ll be placed in the ‘bottom 50 percent’ group for the split qualifying session on Saturday morning.

Third placed man in the series, Daniel Gaunt, will also be in the slower session after a difficult first day driving Evans Motorsport’s Ford.

Fellow title contender Ashley Walsh avoided the cut-off by the narrowest of margins in 17th.