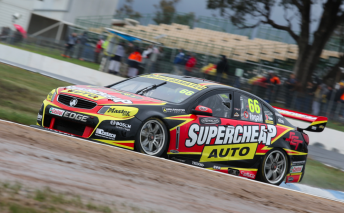 Russell Ingall came out on top amid a flurry of fast times at the end of Practice 1 at a drying Winton Motor Raceway.

Ingall’s best of 1:34.03s was recorded after the chequered flag had fallen, proving 0.09s quicker than a lap set by Craig Lowndes just seconds earlier.

Fabian Coulthard had sat atop the order for much of the session before the improving grip levels saw Ingall, Lowndes, Garth Tander and Chaz Mostert all trade the top spot in the final six minutes.

Neither were able to beat their earlier wet tyre times, however.

Mostert and Tander were evenutally bumped to fourth and sixth respectively, with Michael Caruso third and Scott Pye fifth.

Caruso’s Nissan had been one of five cars to cause red flags during the session. 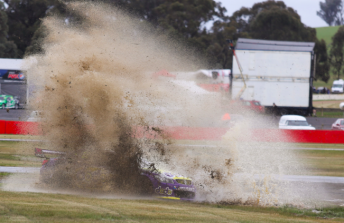 The first stoppage occurred when a sensor failure saw Chris Pither stop the #21 Wilson Security Holden on the circuit just minutes into the first half hour of co-driver only running.

Paul Morris and Daniel Gaunt both later fell victim to the slippery outfield at Turn 6, while similar issues struck Todd Kelly and James Courtney after offs at Turns 1 and 11 respectively.

Andrew Jones sat atop the order at the 30 minute mark, although Greg Murphy and Steven Richards would eventually go faster after running longer than the Dunlop Series driver.

Only 21 cars appeared in the first 30 minutes, with the entries of Jonathon Webb, Shane van Gisbergen, Alex Davison and Ingall all without co-drivers present this weekend.

Davison’s car was not seen at all until the 53 minute mark, with Ford Performance Racing content to watch others undertake the wet running.