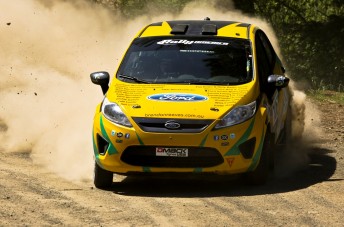 With three wins from three starts in the Rally America Series, Australian Brendan Reeves will enter this weekend’s Ojibwe Rally with one aim – to win again and take maximum points to help clinch the two-wheel-drive title.

On his debut in the US series, Reeves has starred with three-straight wins from the events he has contested aboard a Ford Fiesta 2WD prepared by Team O’Neil.

Despite missing the first two rounds of the seven event series, Reeves and co-driving sister Rhianon Smyth currently sit second in the 2WD championship race, just 23 points behind series leader, Andrew Comrie-Pickard (Scion xD). Not only will Reeves be aiming for a win in the final two rounds, he also needs Comrie-Pickard to finish lower than second on at least one event to ensure he snares the title.

“The three rallies we have done so far have gone quite well,” Reeves said.

“We had some really strong competition in the last round and ACP (Andrew Comrie-Pickard) is getting faster and faster each time we race. The biggest thing we have had is consistency and a reliable car. I’m much better prepared going into the Ojibwe Rally so everything is looking good.”

This weekend’s event includes a total of 222 kilometres of rallying with three of the 15 stages to be held in the dark on Friday night in the Detroit Lakes area of Minnesota.