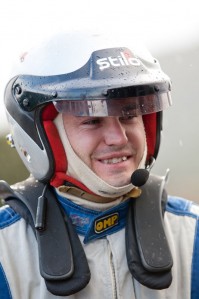 Nathan Quinn will drive a WRC MINI at Rally Australia

Coffs Harbour resident Nathan Quinn will have the same level of machinery as the likes of Sebastien Ogier and Mikko Hirvonen at Coates Hire Rally Australia in September.

Quinn will drive the Motorsport d’Italia team John Cooper Works MINI at the World Rally Championship event in the Coffs coast region on 12-15 September. He will be the only Australian to drive a World Rally Car at the event.

In the biggest announcement of his career, the 29-year-old has been given the honour as the Motorsport d’Italia operation aims to score valuable team points.

“We are still pretty shocked ourselves,” said Quinn.

“It’s all came about through a series of pretty unrelated events, a lot of talking to our support network and a lot of hard work behind the scenes.”

“Realistically we’re aiming for the top ten and to be the first Australian driver home. The WRC field is strong though, but I think as long as I’m there on Sunday and can keep building my pace then we can push towards the top five. As long as I can build my experience and put my mind to it I know we can be there at the end.”

“We’re trying to boost the budget to do a full day test before the start of the event, I think that would be hugely beneficial to both me and the team.

“The car we’ll be running last ran in Argentina, but I believe since then it’s been updated with the latest engine and damper developments. I’m aware of the strengths of the car particularly in the tight stuff, and I think the car will definitely suit the type of rally in Coffs Harbour.”

Quinn’s previous tilts at Rally Australia in lower-category cars attracted enormous support, although he failed to finish either event due to mechanical problems.