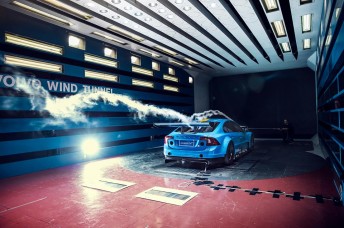 The Volvo V8 Supercar can be expected to loosely resemble the company’s Scandinavian Touring Car, seen here during aerodynamic development

Eponymous team owner Garry Rogers and his star driver Scott McLaughlin are convinced that the ongoing development of the Volvo V8 Supercar package won’t hurt the team’s performances in the second half of the 2013 season.

The underdog outfit has been one of the big achievers in the early stages of the Car of the Future era, with 20-year-old McLaughlin scoring three race wins in his rookie year to date.

The results are being achieved while the team puts together its Volvo S60 package for next season.

One new chassis is already said to have been completed at the squad’s Dandenong, Melbourne, workshop ahead of 2014, with a second underway.

An expanded GRM composite department is working with Volvo and Polestar on crafting the S60 bodywork while the latter company develops the Yamaha-designed B8444S engine to the V8 Supercars rules at its Gothenburg, Sweden, headquarters.

Although Kelly Racing struggled during its final season running Holdens before morphing into Nissan Motorsport, McLaughlin believes that GRM’s customer engine deals, and the timing of the Volvo switch, will ensure that his squad sees no such slump.

“I honestly think we’ve got a pretty strong package to take to the end of the season,” he told Speedcafe.com.

“It’s not like we’re switching our engine development program from one to another, because Walkinshaw does our engines now and Polestar are doing the Volvo ones for us.

“We’re going to be running the same chassis (control COTF design) next year, so what we learn this year with those will benefit us next year as well.

“If anything I think having the Volvo deal will be helping us because obviously the funds (from Volvo) are a big thing. I don’t think we’ll suffer too much.” 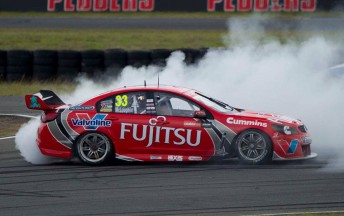 McLaughlin and GRM were winners last time out at Queensland Raceway

Rogers adds that his team has put great emphasis on keeping pace this year.

“Clearly with our car speed, the last thing we need to do is lose sight of what we’re doing now,” he said.

“It’s still 2013 and when we started this in January, Dean (Cowling, team manager) and Crusty (Richard Holloway, McLaughlin’s engineer) made sure we set it up right.

“The only thing that could unseat us a little bit is if we have an absolutely massive crash, which could ‘short circuit’ out fabrication guys, who have done a lot of the work.

“At this stage I think we’ve got the right people in place and everyone knows what’s expected of them.”

Rogers admits that he’s hired additional staff to cope with the workload, but insists the changes have been minimal.

“We’ve only added a couple of people, some fabrication guys, designers and engineering people. We’re still very efficient,” he said.

Rogers adds that his crew are in daily communication with Polestar. Swedish engineers are known to have taken in a team test day at Winton in June, with further visits planned throughout the year.

The team currently has a B8444S engine in its shop, which is understood to be a standard unit that is being used to help assess the motor’s installation within the control COTF chassis and GRM’s in-house design front suspension.

Although the regulations stipulate strict datums for mounting the block, the tall and heavy B8444S, which was mounted transversely when used in Volvo road cars, is expected to provide some unique challenges.

“The engine will fit, we’ve just got to get it to fit,” Rogers said, making light of any suggestion of ‘packaging’ issues.

“People talk about packaging, but we’re not selling cigarettes here! We’ve just got to get it to fit between the chassis rails and make sure the exhaust doesn’t burn the paint off.”

The record sits at Jonathon Webb’s 13th from 2010, ensuring McLaughlin’s current 11th place position has him on track.

As for suggestions that next year could bring the sort of difficulties faced by the Nissan and Erebus drivers in 2013, McLaughlin points out that his recently signed three-year deal means he’s in for the long haul.

“I’m very lucky that I’ve had a good year this year and have been able to show what I can do,” he said.

“I’m bracing for it (to be tough) but I’m also looking forward to the times when we’ve moved forward and got a couple of good results.

“I’m very confident that we’ll be even better than where Nissan and the Mercs were (at the start of the year).

“I think we’ve got a good enough team here to do it. I’m looking forward to it.”

An early December testing debut was originally touted for the first S60 V8 Supercar, although latest predictions suggest that track running may not take place until January.

The racecar is expected to be based on a face-lifted version of the current S60 model that was featured at the June Volvo-GRM announcement.