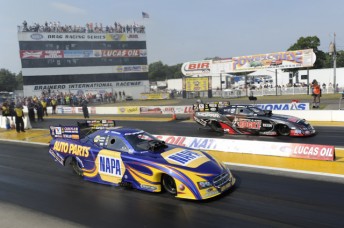 The Ron Capps and Matt Hagan roadshow that has become a feature of the 2013 Mello Yello NHRA Series continued at Brainerd with the pair facing off against one another in the final, the win going the way of Capps. He was joined in victory lane by Spencer Massey in Top Fuel and Mike Edwards in Pro Stock.

Capps’ victory was his third of season 2013 and has kept his hopes of challenging for the Championship well and truly alive. Australia-bound in November, Capps narrowly got past Hagan in the final, despite Hagan getting off the line better than the NAPA Auto Parts racer.

After managing just a ninth fastest time in qualifying following a massive engine explosion, Capps got past Del Worsham in a heavy first round matchup before taking out Jack Beckman and Tim Wilkerson.

“That is the nature of our sport and for sure the Funny Car division,” said Capps. “It is a fun class, but that final round just epitomises how tight our category is right now. You have to be on your absolute best and I wasn’t today as a driver, but (Crew Chief) Rahn Tobler made up for it.”

On the other side of the strip, Hagan got through on Tony Pedregon, Courtney Force (who along with father John secured her place in the Countdown this weekend) and Johnny Gray in the semis.

Australia’s Dave Grubnic is edging closer to securing a spot in the Countdown, to be conducted over the final six events of the NHRA Mello Yello season. With 10 racers going through, Grubnic entered the weekend 11th on points, however a first round win over Morgan Lucas helped him build much needed points.

The second round ended Grubnic’s day – who qualified fifth – when he lost out to points leader, Shawn Langdon in the Al-Anabi dragster.

The other Australian operation in the Mello Yello Championship, Rapisarda Autosport International, had one of its best qualification runs of the season. Tommy Johnson Jr setting the ninth fastest time in the 16 car field.

It was a short lived run, however, with Steve Torrence getting around Johnson to advance to the second round – the pair leaving the line within 0.001 seconds of one another.

At the top end of the field, Spencer Massey took his first win at Brainerd in Top Fuel despite an engine fire in the first round (see video below). The crew worked overtime to replace all of the critical components and get the Battery Extender car back out and then to victory lane. Up until today, he’d never taken a round win at the venue. 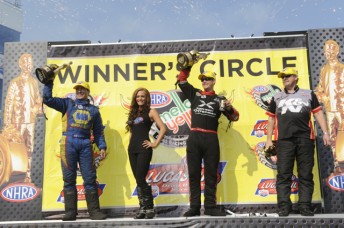 The winners at Brainderd were Ron Capps, Spencer Massey and Mike Edwards

“We just hadn’t had any luck here,” said Massey. “I won in Top Alcohol Dragster, but this is a completely different category and I’ve always lost in the first round. I wanted to see that win light come on for the first time in Brainerd. I would have been happy no matter what happened in the second round because we got that round win, but we obviously wanted to keep going on.”

His 14th career win and fourth of the season came at the expense of Clay Millican in the final after earlier getting by Brittany Force in the Castrol EDGE dragster, Tony Schumacher and Khalid alBalooshi.

Meantime, Millican’s path to the decider came by claiming the scalps of Terry McMillen, Torrence and Championship leader, Langdon.

The win positions Massey second on the points ladder.

He beat home V. Gaines in an outstanding final to claim his fifth win of the season, in the process getting by the likes of Greg Stanfield, top qualifier, Vincent Nobile and defending champion, Allen Johnson.

“I’m not sure, but I don’t think that I’ve ever been past the second round here before,” said Edwards. “We weren’t really that fast this weekend, but we managed to stick around, and I’m so proud of my guys because they really stepped it up. We had ignition problems during qualifying and really didn’t know if we had it fixed or not before today’s eliminations. We swapped ignition systems, engines, and we swapped everything. But it worked out, so we’re happy.”

Gaines’ path to the final included wins over Steve Kent, Larry Morgan and Greg Anderson. A big first round casualty was the in-form Jeg Coughlin Jr who lost out to the unheralded Mark Martino.

The next event on the NHRA Calendar is the biggest event of the year – the Lucas Oils US Nationals in Indianapolis, it will run from August 28 to September 2. It also doubles as the final event prior to the Countdown and will feature the TRAXXAS Shootout and the MOPAR Hemi Challenge.