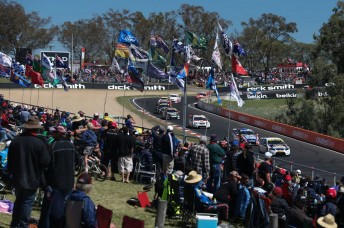 Bathurst is the ultimate test of a co-driver’s mettle

Following the removal of the international driver format from the Armor All Gold Coast 600, this year will see the 28 full-time drivers each keep their Sandown and Bathurst partners for all three events for the first time.

Of the new pairings, most notable are the destinations of last year’s full-timers Steve Owen (with Will Davison/FPR), Greg Murphy (with James Courtney/HRT), Karl Reindler (with Rick Kelly/Nissan) and Steve Johnson (with Maro Engel/Erebus).

While the primary driver, team and equipment will all play their role in determining which co-drivers stand atop the podium at Sandown, Bathurst and the Gold Coast, this week’s Pirtek Poll allows you to have your say on which co-driver you think is the pick of the bunch.

Available co-drivers will get third Friday practice opportunity of the year this weekend at Winton; the location of the final sprint event before the enduros.