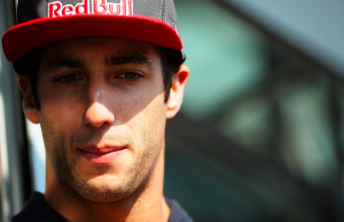 Speculation that Daniel Ricciardo will partner Sebastian Vettel at Infiniti Red Bull Racing next season has intensified with German media reporting that the deal is done.

Germany’s Sport Bild online has today reported that the announcement of Ricciardo’s graduation will take place at next weekend’s Belgian Grand Prix.

Currently in his second season at Red Bull’s junior team Toro Rosso, the Australian has been one of the favourites for the drive since countryman Mark Webber confirmed that he will exit F1 at season’s end.

Lotus driver Kimi Raikkonen had been thought to be Ricciardo’s greatest threat for the seat, but is linked by Sport Bild to Felipe Massa’s drive alongside Fernando Alonso at Ferrari.

Red Bull’s motorsport advisor Helmut Marko confirmed the timing of the Red Bull announcement to the paper, but declined to comment further.

“We are not going to make anything known before Spa,” he is quoted as saying in the German language publication.

“I cannot add any more to this.”

The Sport Bild report emphasises Ricciardo’s ability to work alongside Vettel, quoting the 24-year-old on his relationship with the German.

“Sebastian and I have had dinner together a couple of times. I get on well with him,” he said.

Ricciardo, however, added that he is expecting to be able to fight for wins against the three-time reigning champion.