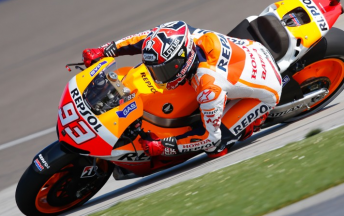 Marc Marquez is poised to extend his MotoGP championship lead on Sunday after shattering the Indianapolis Motor Speedway lap record to grab pole in qualifying.

The Honda rider, who has won at the famous American circuit for the last two years in previous categories, continued to show his impressive pace at the venue by dominating qualifying.

The Spaniard was a full half a second quicker than title rival Yamaha’s Jorge Lorenzo as he set a 1 minute 37.958s time, which shattered Dani Pedrosa’s lap record from last year.

Pedrosa completed the front row in third ahead of Tech 3 Yamaha’s Cal Crutchlow. Only 17 thousandths of a second separated second to fourth positions in what was to prove a tight qualifying session behind Marquez.

Alvaro Bautista was a surprise fifth ahead of local rider Nicky Hayden making his last MotoGP appearance at Indianapolis.

Monster Yamaha’s Bradley Smith and Stefan Bradl, who has just extended his contract with LCR Honda, were seventh and eighth ahead of a frustrated Valentino Rossi.

Rossi has been struggling with his Yamaha throughout the weekend with turn in issues which has left him almost 1.4 seconds adrift of Marquez. Ducati’s Andrea Dovizioso rounded out the top 10.

Pramac Ducati rider Ben Spies endured a horror return to the championship this weekend. The local rider dislocated his shoulder in final practice and will not take part in the race.

Australia’s Bryan Staring showed glimpses of pace as he secured 20th on the grid with his CRT Gresini Honda.