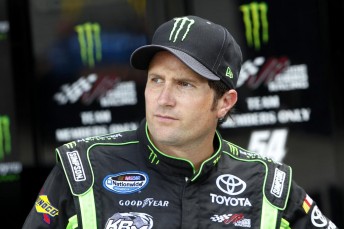 Substituting for Kyle Busch in the Monster Energy Joe Gibbs Racing team, the Tasmanian focused on setup for the race during the first one hour session of the day and ended that session fourth overall.

The plan was for limited running in the afternoon two hour session, with a final hitout to establish a baseline for qualifying part of the plan.

Midway through the qualifying simulation, Kelly was hampered through a yellow flag period and this hurt his running on fresh rubber.

Traffic made Kelly’s second bite at a qualifying-style run difficult; overall he came home in sixth spot in session two. This wasn’t indicative of where the 36-year-old Tasmanian or the Joe Gibbs Racing team feel their true pace is.

Following on from yesterday’s testing, more changes were made throughout the day, with Kelly reporting the car was a little loose into the first turn, but tight through the 11th turn on the famous Sports Car Course in Lexington, Ohio. The #54 Toyota that Owen Kelly is driving this weekend

“We’re very happy with our race setup. Today was all about getting it right for the race, we’ve continued to make changes to the Monster Energy Toyota and it’s feeling very good,” said Kelly.

“The intention was to take it easy in the second session and setup for a qualifying run ahead of tomorrow.

“A caution period happened on the quick lap, which took the edge off the new tyres. The team sent me out again and we battled against plenty of traffic and couldn’t get a clear lap.

“The final position wasn’t an indication of our pace; I think we’re a lot better than that.

“Tomorrow will be about getting a good position from qualifying, which I think is achievable, and then in the race get the strategy working and hopefully end toward the front.”

Marcos Ambrose will also take part in the race, but all the running in the #9 Ford was done by Ryan Truex as Ambrose was at Michigan qualifying his Sprint Cup entry.