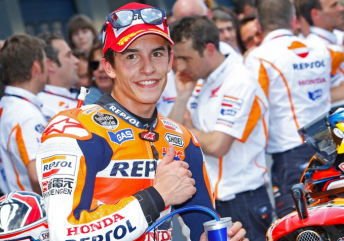 Two-time World Champion and former Honda rider Stoner was back on the bike last week and he also sampled the new 2014 prototype over two days at Japan’s Motegi circuit, as part of a testing arrangement with the team.

Stoner, who retired from the sport at the end of last season, has been plying his trade in the Dunlop Development Series with Triple Eight Engineering this season.

With such a legendary MotoGP force carrying out vital testing miles, Marquez believes his team have gained crucial information which could prove pivotal for this year and next.

“For us it’s quite important. It pays to ride that bike,” he said.

“I didn’t have information about the Motegi test because I didn’t speak with the Japanese guys, but I would like to at Indianapolis. I feel Casey is so fast and he put the bike on the limit for sure in that test.

“I think it’s important for Honda, for Dani and for me. He tested that bike and all the limits.

“Sometimes you can test some parts but if you are not doing the correct lap times or you didn’t push a lot, then you cannot feel good.”

While Marquez is grateful for Stoner’s testing efforts, he revealed the pressure of the leading the championship by 16 points in his rookie year is starting to take its toll ahead of this weekend’s Red Bull Indianapolis Grand Prix.

However, the young Spaniard has won at the circuit in the previous two years in Moto 2 and Moto 3 categories.

“At the moment, the target and the mentality is completely the same as during the first part of the season,” he said.

“Okay, I feel the pressure a little because we are leading the championship so you feel a pressure that you need to keep the level.

“But, anyway, I will try to prepare and to keep things level, but our mentality is completely the same as at the beginning of the season.

“It will be difficult and interesting because Dani (Pedrosa) and Jorge (Lorenzo) have recovered. It’s one of the tracks I seem to ride quite well, so I hope to do the same with the MotoGP bike.”

Meanwhile title rivals Dani Pedrosa and Yamaha’s Jorge Lorenzo have made significant progress with their collarbone injuries that have halted their progress in the previous two Grand Prix.

“I have been doing some recovery these days,” Pedrosa adds.

“Basically it was all about not moving a lot and staying quiet. The healing process is getting better and over these last days we have seen some signs of the bones recovering, so that is good.

“Now I’m just waiting to go out, checking how everything is on the bike.”

Reigning champion Lorenzo has admitted he is still not 100 percent fit from his Assen and Sachsenring crashes, but has been on the bike since the last race at Laguna Seca.

“Obviously I’m not like I was before Assen, but much better than Laguna,” he said.

“I have spent the holiday trying to recover the collarbone, so let’s see how it goes. In fact, the holiday was stopped by the test (at Brno)!

“I think it was important to see how I was on the bike, as I wasn’t great at Laguna, so it was very important for the mind to feel how I was.”