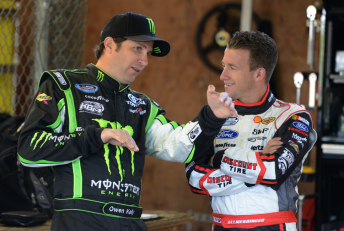 Making his second start of the season in the second-tier division just a week after his Sprint Cup debut at Watkins Glen, Kelly spent the day reacclimatising to the slower Nationwide machines.

Penske Ford driver AJ Allmendinger clocked the quickest lap of the day late in the afternoon, proving 0.096s faster than Parker Kligerman and 0.111s ahead of Kelly.

Despite having his afternoon running hampered by a mechanical failure that ensured he missed the final 45 minutes of track time, Kelly declared himself pleased with the day.

“We feel as though we’re in a good place now, we’ve got more practice tomorrow then qualifying and the race Saturday,” he said.

“They are completely different animals,” he added of stepping from the Cup to the Nationwide car.

“To come from the Sprint Cup car with 900 horsepower to the Monster Energy car that “only” has 700 horsepower is a great difference.

“700 horsepower is still plenty of grunt, don’t get me wrong, but it doesn’t feel like it (today)!”

Ambrose was seventh and ninth in the two sessions and will now miss final practice and qualifying while he focusses on his Michigan Sprint Cup duties.