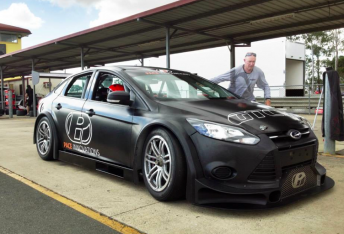 As many as three V8-powered Ford Focus entries could be on the grid at the Bathurst 12 Hour next February.

Based closely on a prototype that was recently designed and built in Australia by Pace Innovations for a new South African series, the Bathurst entries are being spearheaded by experienced endurance racer Ryan McLeod.

The build of the cars is already underway at Pace headquarters in Queensland, with McLeod set to campaign them in a variety of endurance events across the globe in place of his current production-based Holden Astras.

The eligibility of the Fords for the Bathurst 12 Hour, however, is still being determined, as the purpose-built, silhouette machines currently lie outside even the race’s ‘Invitational’ class guidelines.

The ongoing discussions between McLeod, Bathurst organisers and CAMS were one of multiple factors in the race putting a temporary hold on accepting new entries last week. 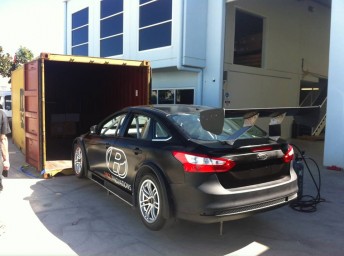 The GTC prototype is being dispatched to South Africa today

“All parties are working together and hopefully the end result is that we get the cars on the grid at Bathurst,” McLeod told Speedcafe.com.

“There might be some concern that we’ve got a hot rod that might win the race, but that’s clearly not the case, or the intention,” he added, noting that early estimates have the cars operating in the 2:14s bracket at Bathurst; well outside the times recorded by the pace-setting GT3 entries.

“Basically what we wanted to do was take what we’ve learnt from the endurance races that we’ve done over the last couple of years with the Astra and nut out what is the most solid and cost effective car you can build.

“When I saw what they were doing for the South African series, I thought with a few modifications that it could be exactly what we were after.”

The first two cars built under McLeod’s watch will be owned by Keith Kassulke and Jake Camilleri, who currently compete in the Touring Car Masters and Australian Manufacturers’ Championship respectively.

Bathurst 12 Hour event director James O’Brien confirmed to Speedcafe.com that he has received three entry forms for the Focus V8s, but that more information will need to be provided before a decision is made.

“We will consider the entries but we can’t make a decision until we have more information,” he said.

“As the cars are currently being built, it’s not like there is existing documentation ready to flow our way for review.”

Differences between the South African GTC cars and McLeod’s endurance entries include larger fuel and oil tanks and the addition of a variety of components distributed by McLeod’s own Racer Industries firm.

Weighing in at approximately 1160kgs, the cars feature a 500bhp version of Ford’s Coyote V8, working through an Albins transaxle gearbox.

It is thought that a class within Australia’s Sports Sedan Series could eventually be created for the cars should local interest warrant such a move.

McLeod says that he hopes to have at least one of the Fords running in January’s Dubai 24 Hours in the lead-up to Bathurst.