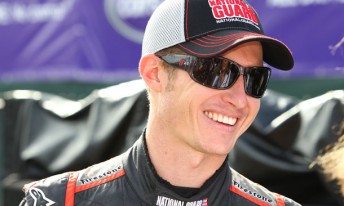 Ryan Briscoe will return to the Izod IndyCar Series at Sonoma later this month after a six-week injury lay-off.

The 31-year-old Australian fractured his right wrist in on-track clash at Toronto in mid-July, forcing him to miss two subsequent races.

He got back behind the wheel of Panther Racing’s Dallara-Chevrolet at a multi-team Sonoma test day this week sporting a wrist brace.

“The test went really well today and my wrist held up great,” he said later via Twitter.

Briscoe is the defending winner at Sonoma following success last year with Team Penske and has finished in the top five in each of IndyCar’s last five visits to the venue.

Starting the year without a full-time drive, Briscoe has made six starts for Panther this season following the team’s post-Indianapolis 500 dumping of JR Hildebrand.

Luhr is already confirmed to make his series debut with Fisher at the Sonoma race, while Hirakawa appears in the frame to score a one-off drive in the second Coyne entry, which was steered by Australian James Davison last time out at Mid-Ohio.