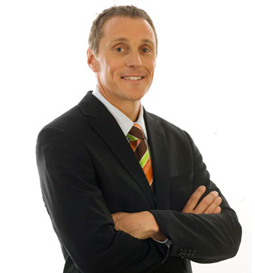 Adding the top motorsport job at Porsche Cars Australia to his existing roles with V8 Supercars and CAMS ensures that the already busy Cameron McConville is in for a hectic second half of the year.

Speedcafe.com’s Gordon Lomas caught up with McConville on his first day on the job at Porsche’s Collingwood offices.

SPEEDCAFE: You’ve have had strong links with Porsche in the past and now you find yourself in the big chair in terms of motorsport. That must be satisfying.

CAMERON MCCONVILLE: Well it has come as a surprise to me. Clearly Jamie has decided to move onto other things. You don’t necessarily pick up someone else’s work two-thirds of the way through a season but by the same token I’m flattered that Porsche contacted me for the role.

I’ve had an association with the brand over 15 years with driver training. It’s funny that Michael Winkler (Porsche Cars Australia managing director) and I have met for a coffee probably once every 18 months where I’ve kept in touch outside of my DSO roles so finally I get to work with the company on a more permanent level.

The timing was a bit of a shock but I’m absolutely stoked to become more involved with Porsche.

SPEEDCAFE: Your bases are pretty well loaded now as you are continuing in the DSO role.

MCCONVILLE: I don’t expect to leave V8 Supercars in the lurch and they gave me an opportunity at the start of the year which I grabbed with both hands. Porsche are aware that I have an obligation there so I will fulfil that role.

Jamey will still be around for the Winton round and that leaves two more Porsche rounds (Bathurst and Gold Coast).

I’m currently filling the role as Race Director for Carrera Cup which means I do spend some time at the Porsche paddock and I’ll still do that. I will probably spend more time there over the Winton weekend to get up to speed.

While I’m busy on the race weekends Porsche will be my main focus along with my CAMS role during the week. I have to thank V8 Supercars and CAMS for allowing me to take on the weekday role to take on the Porsche role.

It is something that as soon as I got the phone call I was red-hot keen to get involved with. We will just have to do a little bit of calculated juggling from now until the end of the year.

SPEEDCAFE: Does it mean you are giving away the DSO role with V8 Supercars from next year? 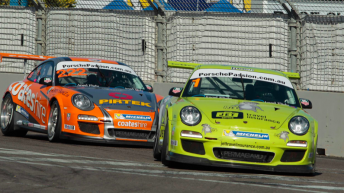 MCCONVILLE: It hasn’t been discussed as yet. I’m trying to instil some confidence with V8 Supercars that I will do the role to the same level as before and also to Porsche customers that I will be here (at Porsche) during the week and it will be my main focus.

My plan is to get through to Sydney Olympic Park (the final round of the 2013 V8 Supercars season) and get everything in place from a Porsche perspective as far as calendar and new car (Cup Cup) deliveries, and then weigh up what I juggle next year.

It has been a crazy year for me so far juggling (jobs) and my mantra for 2014 is to do less juggling and focus on one or two roles and do them to my best level. I will focus on what I’m doing to do for next year come December.

SPEEDCAFE: So you are not immediately ruling out the V8 duties at this stage?

MCCONVILLE: No not at all. This will take a fair bit of my time on a weekday level to about 65 to 70 percent, so it will be a matter of what we can fit in next year on the race weekends.

I’ve been doing the DSO and race director roles for sometime. It’s not something that I plan to completely abandon in the short-term. But we will get through to Christmas and see if it’s something that both parties can continue to manage.

SPEEDCAFE: It’s a significant time to join Porsche with the all-new Cup car coming for next year so the place is no doubt a hive of activity?

MCCONVILLE: I had a good look at the new Cup car at Sydney Motorsport Park (Rennsport meeting in May) and it’s an absolute weapon of a car. I was hosting a function recently and people were talking about the paddle shift but clearly there is a lot more to the car than that.

It’s an exciting time for Carrera Cup and also for Porsche. So I’m looking forward to some continuity and consistency for the next little while.

SPEEDCAFE: With everything that’s going on at Porsche there is probably not much time to ease into the role. Would that be a fair call?

MCCONVILLE: Winton will be busy with the Dunlop Series (as well as the main championship). I want to ensure that they aren’t short changed in any way.

I’m already in the office here at Porsche and for the next couple of days just to get my head around things and hopefully have a good chat to the Porsche competitors and let them know that it is my focus during the week and the new car implementation is done as smoothly as possible.

I’m spending my time between now and Winton getting my head around the state of play with the category.

SPEEDCAFE: Also with 2014 there is the high profile signing of Mark Webber with the Porsche LMP1 re-entry into Le Mans which would have sent an electric buzz through the company.

MCCONVILLE: Le Mans is something which has been on their radar for quite some time (to rejoin in the top prototype class) and I’m hoping to go and as I’ve never been and I would love to go wearing the Porsche hat.

Webber without a doubt will do a lot for the brand in this country because he has a massive following. It’s exciting and perhaps there will be some opportunities for our competitors from all different levels to get involved with Le Mans.