Kiwi to drive with Schneider at Sepang 12 Hour

Kiwi to drive with Schneider at Sepang 12 Hour 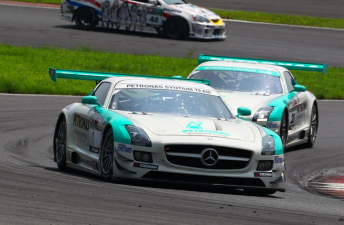 The Petronas team is aiming for its third straight Sepang title

New Zealander Jono Lester has been paired with German star Bernd Schneider for the Petronas Mercedes team’s assault on the Sepang 12 Hour .

Lester, who regularly competes with the team in the Japanese Super Taikyu Series, will share the #1 SLS AMG GT3 with Schneider and Malaysian driver Dominic Ang.

A former five-time DTM champion, Schneider has enjoyed an amazing run as part of the SLS GT3 program so far this year, winning the Bathurst 12 Hour before taking out 24 Hour races at Dubai, the Nurburgring and Spa.

The Sepang race will feature an Australian effort led by Brisbane-based businessman Roger Lago, while other Kiwis set to take part include Craig Baird and Earl Bamber.

CLICK HERE for more about Lester’s drive on Speedcafe.co.nz