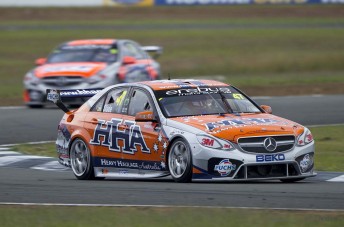 One of the key players remaining in the 2014 silly season, Tim Slade, is hopeful of having his future locked down within the next fortnight.

The 28-year-old has been the subject of intense speculation in recent months following the formerly Stone Brothers Racing outfit’s tumultuous transition into its new Erebus Motorsport guise.

Although other teams are known to have chased Slade’s signature, the Gold Coast-based South Australian is now thought highly likely to stay at the customer AMG outfit next year.

Slade first joined SBR in 2010, completing a single season with Wilson Security backing before spending two years in the colours of Lucky 7.

Erebus has made its intentions to keep Slade beyond 2013 clear, going to the length of issuing a public statement from its CEO Ryan Maddison on the matter last month.

Slade told Speedcafe.com this week that Erebus’ recent on-track progress, with promise of more to come later in the season, is playing a key role in his decision.

“If we were still running around where we were at the start of the year then my thoughts (on the future) would be fairly obvious,” he said.

“At the start of the year, not only from my point of view in the driver’s seat, but for everyone, it certainly wasn’t enjoyable.

“But now we’re back in the race (and) everything going on certainly is a factor and plays a part (in a decision for 2014).”

“I’d like to have something sorted by Winton, if not then definitely before Sandown,” he added when asked of a timeline for locking in a new deal.

Erebus’ E63 AMG package has made significant steps forward in recent events, allowing Slade to qualify inside the top 10 for six of the last seven races.

While the turn of pace hit a new peak with a second-row start in the final race at the recent Queensland Raceway event, Slade is cautious on suggestions of beinging a darkhorse pole threat for Winton.

“The pace has been positive in the last few races so it’ll be a matter of getting to the track and working out if our weaknesses will hurt us or not,” he said.

“Our weaknesses didn’t hurt us to much at Queensland Raceway due to the style of that circuit.

“I don’t think we should be too bad at Winton but in saying that it’s going to be tough because of how many teams are based down there and are typically pretty fast.

Slade will join the Erebus squad for a ride day at Sydney Motorsport Park today ahead of the Winton race meeting on August 23-25.