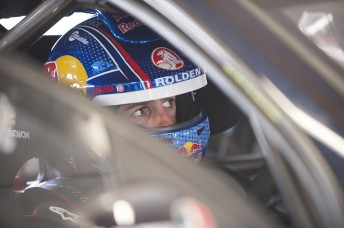 The LDM outfit is a customer of Triple Eight, running a pair of Holden Commodore VFs for Dean Fiore and Scott Pye.

Despite a promising start at Adelaide’s season-opener in March, the team has struggled for results, with Fiore and Pye currently 20th and 26th in points respectively.

Incidents have punctuated LDM’s 2013 campaign to date, including a major crash at Symmons Plains that ruled Pye out of the subsequent Pukekohe event completely.

RBRA team principal Roland Dane confirmed to Speedcafe.com that Whincup will cut laps at the test as part of his squad’s ongoing customer support for LDM.

Whincup’s laps in Pye’s car will complete a swap that had seen the LDM driver sample the #1 Red Bull Holden at Queensland Raceway on July 16.

Fiore’s car, meanwhile, is this year being engineered by Triple Eight employee David Cauchi, who remains based at Triple Eight’s Brisbane headquarters between events.

In addition to Whincup, Fiore and Pye, young drivers Andre Heimgartner and Kristian Lindbom are also in attendance at the test with LDM.

Lindbom, a front-runner in the Dunlop Series with Evans Motorsport, has been earmarked for a possible hit-out with the team in the Friday co-driver session at the Winton V8 Supercars event this month.

Heimgartner completed the same duty for the team last time out at the Coates Hire Ipswich 360; an event where the 18-year-old scored a maiden Dunlop Series race win aboard his Finance Ezi Racing Ford.

Fujitsu Racing GRM and Nissan Motorsport are sharing the rural Victorian circuit alongside LDM, with the latter staying on following its international driver hit-out on Monday.

The team is continuing to develop its current Walkinshaw-powered Holden contenders while working away in the background on its 2014 Volvo S60 package with Swedish performance partner Polestar.