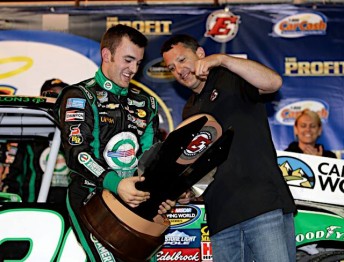 Austin Dillon will drive Tony Stewart’s Chevrolet in this week’s Sprint Cup event at Michigan as the two-time champion continues to recover from a recent Sprintcar crash.

Stewart had a second bout of surgery on his broken leg last Sunday and is not expected to return to racing for at least another three weeks.

Dillon has made nine Sprint Cup starts to date with RCR and Phoenix Racing and is expected to graduate to the Cup Series next season with RCR.

“I’ve watched Austin for many years and at each stage of his racing career he’s been successful,” said Stewart.

“He’s proven to be a very fast learner, and he’s able to adapt quickly. Being the youngest champion in the history of the Truck Series is proof of that.

“His background in dirt racing is an asset, and off the track we share many of the same interests, specifically, hunting and fishing.”

Dillon’s placement at SHR is not without some irony following confirmation earlier this year that long-time RCR star Kevin Harvick and sponsor Budweiser have been signed to Stewart’s team from 2014.