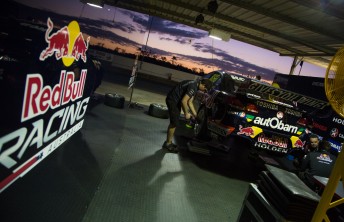 The resignation of Adrian Burgess from his post as Red Bull Racing Australia’s team principal caught the champion squad on the hop.

Almost immediately after informing team owner Roland Dane that he had accepted an offer to move to the Holden Racing Team from the start of 2014, Burgess was told to gather his belongings and leave.

Dane himself has now stepped forward into the role he occupied before hiring Burgess.

Burgess, who earlier in his career worked as a mechanic at the McLaren F1 team, has forged a formidable reputation as a robust manager and organiser of team personnel.

Since Burgess arrived at the Brisbane team in 2011 immediately after helping James Courtney to the title the previous year at Dick Johnson Racing, Triple Eight has lifted the driver’s crown twice through Jamie Whincup.

Those efforts were complemented by Whincup winning Bathurst last year with Paul Dumbrell.

Whincup and team-mate Craig Lowndes currently sit first and second respectively in the 2013 championship standings and have proven two of 10 different drivers capable of winning races in the opening 24 encounters.

Have your say below on whether Walkinshaw Racing’s poaching will shake Triple Eight’s championship charge.