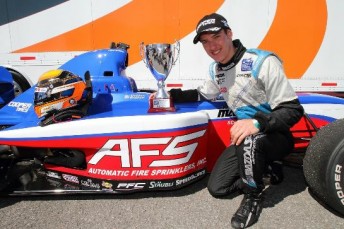 Australian teenager Matthew Brabham is set to graduate to Indy Lights in 2014 after wrapping up the Pro Mazda Championship with victory on the streets of Trois-Rivieres.

A pair of victories at the Canadian venue stretched the third generation racer’s winning streak in the Pro Mazda series to seven.

Brabham now holds the most-wins-in-a-season record, which sits at 11.

“I am absolutely speechless,” said Brabham of wrapping up the title with a round remaining on the streets of Houston in October.

“To get two wins and the championship makes this just an unbelievable weekend, and I couldn’t think of a better place to win the championship, it has been so much fun here in Trois-Rivières.

“At the start of the season, I couldn’t have predicted that I would have a year like this. I am just so, so happy.”

The title victory awards Brabham a fully funded drive in Indy Lights under the Mazda ‘Road to Indy’ ladder system.

Brabham will become the first driver to move into Indy Lights having won the USF2000 and Pro Mazda titles in consecutive years.