Guest drivers Michael Krumm and Lucas Ordonez have enjoyed a challenging day of adapting their internationally honed skills to a V8 Supercar at Winton.

Beginning the test in wet conditions, the duo were able to switch to slick tyres prior to lunch time, eventually cutting over 100 laps of the rural Victorian circuit.

Ordonez endured multiple offs in the morning session, including a red flag-inducing trip into the circuit’s gravel, before getting into the groove during the afternoon.

“It’s amazing – lots of power with no traction control or electronic help so it’s very challenging for a new driver,” said the Spaniard of the Altima. 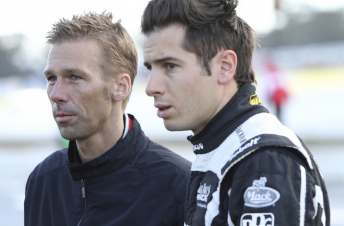 “We’ve been getting on the pace and really enjoying the weather in the afternoon after the rain in the morning.

“It’s very tricky under brakes so I had a few offs, but that’s normal. When you push and you want to find the limit of the car… (this) is the day to do it on a test day.”

“We prepared well, the team gave us all the information about the car and how it is to drive, but when you actually drive it it’s pretty awesome,” he said.

“There’s a lot of power and not much downforce, so it’s not what I’m used to, but it was a lot better to drive than what I expected.

“Winton is kind of a crazy track. It’s bumpy, it’s tight and it has lots of different corners. It’s been great fun.”

The Winton test has come as part of Nissan’s recently announced global driver exchange program, which will also see Rick Kelly team with a pair of yet-to-be-named internationals in a GT-R GT3 attack on next year’s Bathurst 12 Hour.

Having received tutelage from the 2006 V8 Supercars champion today, Ordonez says he’s looking forward to the roles being somewhat reversed in February.

“I’m really looking forward to seeing his feedback and comments (on the GT-R) as t’s a very different car with more downforce, less power, but wider with lighter tyres,” he said.

“I want to see him in the car having as much fun as Michael and me today.”

Ordonez and Krumm will both fly to Japan for this weekend’s SuperGT round at Suzuka, while the remainder of the Nissan Motorsport outfit will remain at Winton for a full day of running with their primary drivers.