Australians reflect on mixed day at the Glen

Australians reflect on mixed day at the Glen 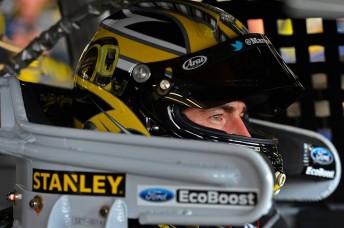 Marcos Ambrose and Owen Kelly were left with little to show for their efforts during a typically rough NASCAR Sprint Cup encounter at Watkins Glen.

Having entered the weekend as a heavy favourite following victories at the New York State venue in 2011 and 2012, crashing out of the race in the closing stages proved a bitter disappointment for Ambrose.

Starting from pole, the Sprint Cup regular led 51 of the first 62 laps before an ill-timed caution put the Richard Petty Motorsports Ford back in the pack.

Running just outside the top 10 on a restart with six laps to go, a suspected mechanical issue saw Ambrose struggle for speed, resulting in the #9 Fusion being pitched into the right-side wall on the run through Turns 2-3-4.

“I just couldn’t get going on the restart; I thought something was wrong,” said Ambrose afterward.

“I was talking to the guys on the radio and we decided to stay out there just to see if it was gonna be driveable, but it wasn’t.

“I was in the way heading up the hill and got dumped by somebody (Max Papis, who was substituting for the injured Tony Stewart).

“That’s just the way it goes,” he added.

“It wasn’t our day, but we’ve had plenty of good days here.  We just need to reflect on this and we’ll wake up tomorrow and just press on and go to the next one.”

Ambrose had clearly been furious as he climbed from the crashed car, throwing his helmet back into the cabin before marching away on foot.

The 36-year-old hoped that a race win at the Glen would push him inside the top 20 in points, opening up the possibility of earning a wildcard spot in the Chase.

Eventually taking the flag in 24th, Kelly estimated that he had lost “around eight spots in jamming on the brakes to miss him (Ambrose).”

Having started 23rd, avoiding incidents had proven the order of the day for Kelly who, in his first Sprint Cup start, had far more humble expectations than Ambrose.

“It was an awesome experience – NASCAR is such a big sport over here it is hard to put into words,” reflected Kelly.

“At one point, we were struggling with the front end and I looked into the mirror and Jeff Gordon was chasing me and pushing on my bumper to get by. I thought then ‘this is pretty cool, it’s not every week you get pushed around by Jeff Gordon.’

“That probably brought it home for me how big a deal this was. It was definitely the biggest race that I have ever been involved in.

“I’m thankful to the guys from Phoenix Racing for the opportunity, we didn’t get the result we were looking for in terms of position, but showed that we can be part of this deal.

“Having come here on Friday never driven a NASCAR Sprint Cup car before, never driven Watkins Glen before, contending with rain during practice and everything else, to look back on qualifying to be the best of the non-regular runners and survive all of that which happened today was a huge achievement.”

Kelly will be back behind the wheel of a NASCAR next weekend at Mid-Ohio, where he’ll complete the second of two scheduled drives in Joe Gibbs Racing’s #54 Nationwide Series Toyota entry.

Ambrose will also be on the Mid-Ohio grid in a one-off second-tier start with RPM, dovetailing the drive with his Sprint Cup efforts at Michigan.