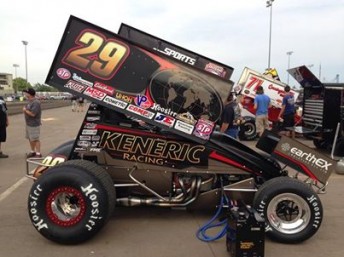 Kerry Madsen has come home second in the Thursday night Preliminaries for the FVP Knoxville Nationals in Iowa, narrowly finishing behind Brian Brown in a tight race right throughout the 25-lap A-Main.

Madsen qualified his West Australian-owned Keneric Racing machine in 12th position, before getting a direct transfer from the second heat where he finished in the runner up position.

After starting the A-Main fourth, he was able to follow the fifth placed starting Brown through the field in front of him before it became a flat race between the two.

Brown stuck to the bottom, whilst Madsen was searching for moisture on various parts of the racetrack. Late in the race, he was able to nose in front of Brown – who has been tipped as a favourite across the board heading into this week’s event – however wasn’t able to lead a full lap.

The tenacious Brown kept using lapped traffic to his advantage to stay in front and take the win, positioning himself second highest on points for night two behind quick time man Joey Saldana. The pair occupy the front row for Saturday night’s main event, whilst Madsen will start from the outside of row four.

Madsen was disappointed with second but has his eyes on the bigger prize:

“It is disappointing to be so close and then come home second, but on the positive I was able to get some good points from that,” the St Marys (NSW) born racer said. “It’s been a massive effort from the Keneric team this week, they’ve built a new car, put a new colourscheme on the thing, which seems to be working well.

“I hope that we can improve come Saturday night, I really think we can.”

Brown was happy with scoring the win, however was philosophical stating he felt the pressure on his shoulders.

“I was pretty nervous heading into that one, I didn’t want to let down all those people who said we should be right up there and we didn’t,” he said. “The car was fun to drive tonight, I got to the bottom pretty early and just held it there.

“Kerry and I had a chat before the race and said that we weren’t going to crash each other if we didn’t have to, I shut down on him a couple of times, I hope he isn’t too disappointed with me because of that.”

Third placed was Kevin Swindell from Roger Crockett and Saldana.

Madsen was the only Australian in action to make the feature.

Brooke Tatnell bowed out in the B-Main, finishing one spot outside the top four transfer, despite starting fourth. He qualified 10th in time trials before finishing his heat race in sixth.

The only other Australian in the field tonight was V8 Supercar regular, Paul Morris, having his first crack at the 410 Nationals. It was heartbreak for Morris in qualifying. The top 50 qualifiers advance into the five heat races – he qualified 51st one-tenth of a second from the field.

Whilst not racing in the heats, he was tacked onto the back of the C-Main where he advanced to eighth – marginally behind veteran and Australian regular, Danny Smith. He will get another chance tomorrow night to move himself forward in points.

Tomorrow will see more heat and ending with the World Challenge, with the opportunity for some drivers to take a chance to re-ignite their points chase ahead of Saturday night’s Knoxville Nationals.