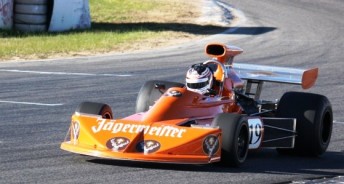 John Bowe will this weekend begin a two-part foray into historic open-wheel competition that is set to culminate in racing a Formula 1 car at Laguna Seca in California.

Joking that his Formula 1 debut has “come 30 years too late”, the evergreen 59-year-old will compete at the Rolex Monterey Motorsports Reunion in a 1974 March-Cosworth over the August 16-18 weekend.

Once raced by legendary German Hans-Joachim Stuck, the car was purchased by steel merchant and noted car collector Joe Calleja while accompanying Bowe in the US for last year’s Monterey meeting.

In addition to the March, Bowe will again be behind the wheel of Calleja’s 1965 Chevrolet Corvette that he competed with at Laguna in 2012.

Although Bowe is yet to race an F1 car, he is no stranger to quick open-wheel equipment having driven Formula 5000 and Formula Atlantic machinery in the late 1970s and 1980s.

“All my life I’ve wanted to race an F1 car, I just didn’t think it’d take me this long to get a drive!” Bowe told Speedcafe.com.

“The March is such a beautiful little car, they were so simple back then. I’ve tested it at Winton and it’s not as brutal as a 5000, it’s more delicate.

“There are going to be a lot of good later model cars there, so we are probably not going to be right up the front, but even so, we won’t be hanging around.

“Something like this is 40 years old but it’s stil three or four seconds a lap faster around Winton than a V8 Supercar.”

The competition to which Bowe refers includes F1 machinery stretching from a 1973 Shadow DN1 through to a pair of 1983 Williams FW08/Cs.

Having been almost exclusively Australian-based during his open-wheel career due to a lack of funds, Bowe says he would have loved to have been a part of a special era in Grant Prix racing.

“Maybe it’s just a legacy of growing up when I did, but I just see the 70s as the real golden era. I would have loved to have driven in it,” he said.

“I always had such admiration for the Aussies that did go over there because, as is still the case, it wasn’t very easy to do.

“Larry (Perkins), Alan (Jones), my childhood hero Tim Schenken… even Mark Webber, they all went over there with basically no money. I hold them all in such high esteem.”

Bowe will head to the USA after racing a 1967 Brabham BT23B – a three-of-a-kind Conventry Climax-powered hillclimb version of the BT23 Formula 2 car – at this weekend’s Winton Festival of Speed.

Having competed in the Australian GT Championship aboard a Maranello Motorsport Ferrari 458 at Queensland Raceway last weekend, and in the Touring Car Masters with his own Ford Mustang on the same circuit the week prior, Bowe is currently racing more frequently than ever.

“I’m a racing addict, there’s no question about that,” he said.

“It’s no secret that I had a pretty difficult time at the last part of my V8 Supercar racing life.

“I suffered from depression pretty seriously because it had been my life for a long time, and I just made a concious decision that I’d race as much as I can race because I love it.

“Fortunately I have been able to race a fair bit, but maybe four weekends in a row is a bit much.

“To be honest I’m just looking forward to getting on the plane and having a sleep!”

Bowe won two Australian Drivers’ Championships in open-wheel cars before going on to score an Australian Touring Car Championship title and a pair of Bathurst 1000 trophies in tin-tops.