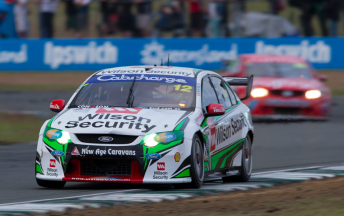 The resurrection of Dick Johnson Racing has taken another step forward with title sponsor Wilson Security extending its deal with the team through until the end of the season.

The security firm stepped in to support the ailing outfit just days prior to the season opening Clipsal 500 and has been operating on a rolling agreement with the team ever since.

The success was also the first for Wilson Security since it joined V8 Supercars as a title sponsor in 2009.

The BJR deal remains in place this year, while the company’s logos are also seen in a number of support classes, including in the Touring Car Masters where it supports popular veteran John Bowe.

Although stressing that his company’s presence on the DJR Fords could still diminish if the team finds an alternate sponsor, Wilson CEO John McMellan says that the deal with the squad has to date proven valuable to both outfits.

“We moved to support DJR earlier this year on a short term basis based on the simple fact that they needed a hand and we wanted to help,” he said.

“It is important though to understand that we have never intended to preclude DJR from finding another major partner and this is still our position.

“Our decision to provide support for the remainder of 2013 is to assist the team by providing them with stability and certainty for the season whilst they continue to regroup and execute their new business plan.”