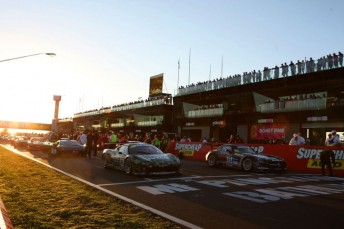 Bathurst 12 Hour organisers have temporarily ceased taking entries for the 2014 event after an unprecedented level of early competitor interest.

A total of 44 cars have entered prior to the race’s ‘early bird’ entry fee discount offer expiring on August 1, seven more than at this time last year.

Fears that other overseas squads who have expressed interest but not yet formally lodged an entry could be locked out of the race if it reaches its 55 car limit have been the main driver behind the temporary freeze.

Squads in such a position are said to include previous participants Phoenix Racing (Audi) and Black Falcon (Mercedes).

“We have a number of international teams liaising with our freight partner on the entry freight packages which, by virtue of their design, are not linked to the 31 July entry offer,” event director James O’Brien told Speedcafe.com, adding that there are also local invitational class entries currently being assessed for eligibility.

“Obviously there are teams there intending to enter that are in the process of going through those logistical discussions and we don’t want to disadvantage them by shutting them out with a full grid.”

Race organisers are working directly with Gibson Freight on its international entry logistics this year after parting ways with the Dutch-based Creventic organisation that had previously filled the role.

No strict class quota targets have been put in place, contributing to the desire to freeze all entries.

“We’ve got six classes at the moment and we want to make sure we’ve got the right balance across the field,” added O’Brien.

“After we take a brief pause we may just resume (taking entries) freely, or we might reserve some spots in certain classes.”

O’Brien warned that, although the track density for the circuit sits at 72 cars, the event’s self-imposed 55 car limit will unlikely be lifted, citing a strong desire to avoid traffic congestion across the top of the Mountain.

A total of 13 production cars are on the current entry list, including a two-car Fiat 500 effort from the Fiat Chrysler Group.

The slower entries will face an increased challenge to qualify within 130 percent of the pole time next year after the removal of the previous 2:06.0s benchmark time.

See below for the entry list as of August 1