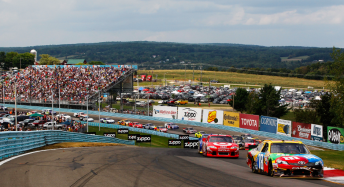 Kyle Busch leads on the field at Watkins Glen in 2012

Noted as the smallest team in NASCAR, Phoenix Racing which is based in Spartanburg, South Carolina, has hired Kelly for a one-off drive ahead of a change of ownership that will take effect early next month.

The deal reunited Kelly with Phoenix engineer Dickeson, who was working for Terry Wyhoon’s V8 Supercars Development Series team with which Kelly won a rain-hit Oran Park round in 2007.

“This race can be won in many different ways and I’m saying we can win this race,” Dickeson told Speedcafe.com of Watkins Glen. 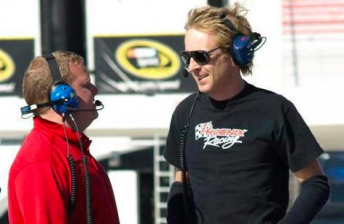 “There is no doubt in my mind it’s just a matter of piecing it all together. I think I would have to take the next few weeks off it we win this. ”

Kelly joins fellow Tasmanian Marcos Ambrose on the NASCAR grid this weekend as the eighth Australian to start in the top stock car class.

It is a moment which is not lost on Dickeson, who says he’s honoured to be part of such a landmark representation of Australian drivers.

“I’m pretty proud to be a part of it and it’s just funny how our paths have crossed again.

“It’s been six years since we last raced together and I’m looking forward to the whole deal.”

Ambrose is the two-time reigning winner of the Sprint Cup race at Watkins Glen.