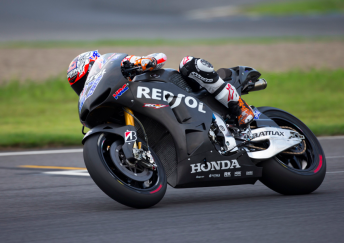 Casey Stoner says that an enjoyable second day of testing with Repsol Honda at Motegi has not changed his mind about making a racing comeback later this year.

Having completed just six laps on his return to a MotoGP bike after wet weather hit on Tuesday, Stoner completed 47 tours of the Japanese venue to round out the test.

The two-time MotoGP champion began the day running development items on Honda’s existing RC213V before moving onto a prototype 2014 bike in the afternoon.

“Thankfully today the weather improved a lot, in fact it was pretty hot, and we were able to get some good track time and work on our test program,” he said.

“We had a productive day in general and thankfully the test plan wasn’t too hectic, so we were able to get most of it done today, after yesterday’s washout.

“It was great to see the team, even if there were only a few people here, and I thank Honda for all their support as ever.”

Stoner has committed to further testing with Repsol Honda later this year; a move that immediately fuelled rumours that he could race as a wildcard in the Australian and Japanese Grands Prix.

“It felt really good to get back on the bike after nine months and I’m happy with how the test went, but it doesn’t change my mind about the wild cards – this is not something I am planning to do,” he added.

Stoner had also been linked to a possible Bathurst 1000 wildcard entry with Triple Eight, but is now expected to focus on his Dunlop Series duties during the October weekend.