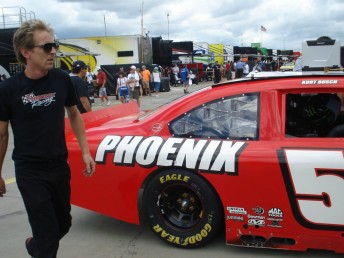 Andrew Dickeson is excited about teaming up with engineer Owen Kelly again on the biggest weekend of the Tasmanian’s successful racing career.

Dickeson works on the #51 Chevrolet which Kelly will commandeer in his maiden NASCAR Sprint Cup race at the Watkins Glen road course this weekend.

The pair worked together for Terry Wyhoon’s Fujitsu V8 Supercars Development Series team six years ago when Kelly guided the Falcon to victory in two of the three races at Oran Park in wet conditions in 2007.

Soon after both Dickeson and Kelly relocated to the US. Dickeson eventually landed a gig with the Phoenix operation in Spartanburg South Carolina, set up residence in nearby Charlotte.

Kelly continued on his nomadic ways, picking up drives here and there and having several flings at NASCAR’s Nationwide Series.

Most recently Kelly finished a meritorious fourth in Kyle Busch’s #51 Monster Energy Toyota at Road America after running out of fuel when he was in the hunt for the lead.

Speedcafe.com editor-in-chief Gordon Lomas had a chat with Dickeson on the eve of the Cheez-It 355 which will feature two Australian drivers – a couple of Tasmanians no less with Marcos Ambrose gunning for a third straight Watkins Glen win.

SPEEDCAFE: You previously worked with Owen Kelly in the Development Series briefly in 2007 and scored some decent results. Now you find yourselves together again on the biggest stock car stage of them all. It must be a special feeling?

DICKESON: Owen raced with us a couple of times in 2007 and we had a pretty good run there he got us a win. I worked for Terry Wyhoon in the Development Series from 2003 through to 2007 and he taught me everything I knew about race cars.

I remember at Oran Park in 2007 it rained all weekend. You know as well as I do rain is a great equaliser in road course racing.

And Owen just gave them a lesson. He won two of the three races and they were my only Supercar wins and you obviously remember them because they were so special.

We kept in contact and coincidentally we both moved over here (US) soon after that and he went and did his late model thing and we kept in touch.

When he first qualified Ambrose’s car a couple of years ago that was pretty cool. He did the same thing in Kyle Busch’s car and people started to notice.

Kyle is not an easy person to impress especially if you are a driver. This year the opportunity to drive the best car in the Nationwide Series is quite an honour.

Everyone I’ve spoken to around here who has raced against him speaks highly of him.

SPEEDCAFE: There’s been a few drivers share the #51 this year, which driver has the best result?

DICKESON: AJ Allmendinger has raced the best for us. We’ve had a couple of races where we’ve had a bit of bad luck.

Before that we were averaging from 13th to 15th which for a small team like us is excellent. Regan Smith had a sixth and a seventh at Talladega and Daytona but a lot of luck goes into those races. You can just as easily finish fifth as you can 35th.

But AJ has probably raced the best for us consistently and he’s a world class act.

SPEEDCAFE: As you know Owen has done some good work in his Nationwide Series appearances in the past, what are the biggest hurdles he faces this week at Watkins Glen.

DICKESON: On average these cars are around 230bhp more than what he’s used to.

They probably accelerate faster and brake harder than that he’s used to. I think he will get across the track pretty quickly.

If he was in a Nationwide car at Watkins Glen I think you would see him qualify right up the front.

Getting used to the Cup car he will have his hands full and have a lot going on there for the first 30 minutes or so until it becomes a little bit more natural and he can relax a little bit.

Up until then he’s just going to have to take it all in because things happen quickly.

SPEEDCAFE: Given the horsepower challenge what is going to be your approach easing into the weekend?

DICKESON: We have a set-up which we came up with last year with Kurt (Busch). I think the #51 car was the fastest in practice there. So we know what works.

We did a little bit of testing with Hendrick Motorsports last week and they went in with a whole bunch of stuff including our set up from last year and they found it was the best too.

So we know we have a good package where we can basically let Owen go out there and just do laps.

Every single lap he does he’s going to get better and better. We know we don’t have to chase the car a lot because we are in the ballpark to begin with.

We know we are not going to have to make wholesale changes. Owen’s feedback is going to be limited by his experience and we are lucky we have a particularly good baseline set-up at this track.

We have two 90-minute practice sessions on Friday, qualifying on Saturday and the race on Sunday. So the three hours of track time is critical for us.

SPEEDCAFE: Looking from a distance the impression is that the standards of Sprint Cup drivers on road course have lifted markedly. What are your thoughts on that?

DICKESON: I’m going to say in the last five years they definitely have. That’s a credit to the regular drivers.

I think they saw that it was kind of embarrassing some of the performances they were putting out.

The races would be like a battle of eight to 10 guys. A lot of them did a lot of work with some experts but now these road course races are as competitive as a mile-and-a-half race.

It’s hard for the road course ringers, if you want to call them that, to come in and just run top five now.

Five years ago guys like Boris (Said) would come in and be automatically top five and it was a given. Whereas now the standard has been raised since I’ve been living in the States.

SPEEDCAFE: With the sale of the team what’s the immediate future for you guys at Phoenix?

DICKESON: Right now its business as usual up until the end of this month. Then the new owners led by Harry Scott take over and I’m not sure what they have planned.

We’ve just been told to keep working hard. Right now obviously this weekend is very exciting and the other stuff will take care of itself.

SPEEDCAFE: Hooking up with Owen again must have given you a bit of a shot in the arm in the tiring NASCAR schedule.

DICKESON: It’s been kind of refreshing linking up with Owen. We’ve had a bit of a holiday here in Charlotte where I live in the last couple of weeks catching up.