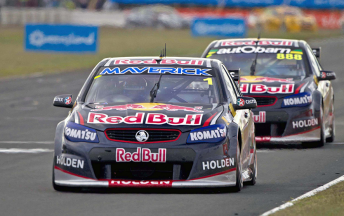 Roland Dane will step back into the role of team principal at his Red Bull Racing Australia operation after being blind-sided by a strategic head-hunting move from Walkinshaw Racing.

Adrian Burgess, team principal at Dane’s squad since 2011, will replace Steve Hallam as the managing director of the factory Holden squad.

The shock departure comes 10 days after confirmation that James Courtney, who is a close friend of Burgess having worked with the Briton in British Formula 3 and more recently at Dick Johnson Racing, had signed up for another three-year term at the HRT.

An incensed Dane told Speedcafe.com that he expects Burgess to honour a six-month notice period, adding that he will take over Burgess’s position within the team immediately.

“If HRT think that the only way they can win is to try and take people from us then fine, they are clearly a richer team than we are,” Dane said.

“It’s clearly driven by James (Courtney), so maybe I should have anticipated it, but I didn’t. “The essence of it is that Adrian came to see me and told me he had decided to take up a job offer at HRT. I agreed with him that it was inappropriate that he stayed here.

“He has a six month notice period which he is expecting to serve out we’re expecting him to honour before he takes up a position with HRT which he agreed to this morning.

“He is effectively on gardening leave for six months and I go back to doing what I did before.

“For the moment I’ll resume that role and we will carry on.

“We won an awful lot of Bathursts and races before he came along and we will carry on in that light now.

“We are disappointed and these things happen (but) I’m not scared of that role.
Onwards and upwards.”

Burgess had travelled with the race team as recently as Tuesday, leading the squad’s ride day program at Sydney Motorsport Park.