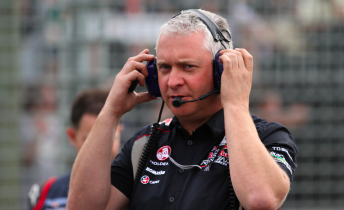 The deal will see Burgess relieved of his RBRA duties immediately before taking over Hallam’s position in the new year.

The shock news was confirmed by Walkinshaw Racing this afternoon via a statement in which its owner Ryan Walkinshaw described Burgess’ signing as a ‘long term succession approach’ to replacing Hallam.

“Steve and I have discussed the restructuring progress, and both his and the team’s long-term futures, and formulated a plan around those,” he said.

“We had to ensure the right long-term succession approach and with a limited field of suitable candidates, and interest from one of those candidates, we have brought forward the timeline from that which we had originally identified. Steve will continue in his role until the end of the year.

“Adrian’s experience, leadership skills and passion for winning make him the ideal candidate to continue to build on what Steve has achieved and lead Walkinshaw Racing into the future.”

Hallam has spent little over 18 months at the helm of the HRT, in which time it has won just a single V8 Supercars Championship race.

The 61-year-old Briton had moved to Australia following a stint in the United States with NASCAR Sprint Cup outfit Michael Waltrip Racing.

His previous experience included a lengthy stint in Formula 1 at McLaren, where his career first overlapped with that of countryman Burgess.

Burgess’ move will see him reunited with James Courtney, who signed a new three-year contract with the HRT less than two weeks ago.

The pair previously worked together at Carlin Motorsport in British Formula 3 and at Dick Johnson Racing in V8 Supercars, with the latter period netting the pair the 2010 title.

Burgess headed to Triple Eight for the following season, playing a part in a further two championship victories, along with the 2012 Bathurst 1000.